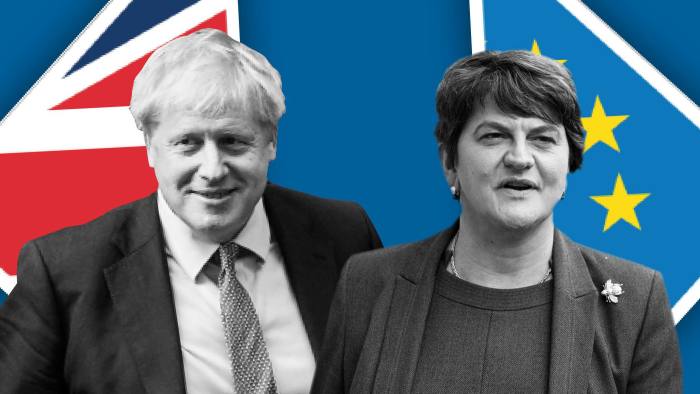 The Democratic Unionist Party has had further talks in Downing Street, as the future of Boris Johnson’s Brexit deal hangs in the balance.

The PM is in a race against time to get a deal before Thursday’s EU summit, as discussions continue in Brussels.

Differences remain on proposed customs and tax arrangements, and how to get support for them in Northern Ireland.

But the PM must persuade the DUP and Brexiteer Tories to back any deal with the EU to get it through Parliament.

The issue of the Irish border – and how to handle the flow of goods and people across it once it becomes the border between the UK and the EU after Brexit – has long been a sticking point in the negotiations.

The border is also a matter of great political, security and diplomatic sensitivity in Ireland.

The backstop – the solution to border issues agreed by Theresa May – proved unpalatable to many MPs so Mr Johnson has come up with new proposals to dispense with it.

However, they would see Northern Ireland treated differently from the rest of the UK – something the DUP, among others, has great concerns about.

The BBC’s Brussels reporter, Adam Fleming, says there has been a shift in emphasis in the Brussels talks away from issues around customs towards matters surrounding the so-called consent mechanism – the idea the prime minister came up with to give communities in Northern Ireland a regular say over whatever comes into effect.

The DUP is understood to be most concerned about this issue too. The party also fears the creation of a “customs border” in the Irish Sea, which would require checks on goods between the rest of the UK and Northern Ireland.

The UK is due to leave the EU at 23:00 GMT on 31 October and Mr Johnson has repeatedly insisted this will happen, regardless of whether there is a deal or not.

The EU’s chief negotiator, Michel Barnier, will update the bloc on the state of the negotiations later when he briefs commissioners and ambassadors.

Mr Johnson, who spoke to his Irish counterpart Leo Varadkar on Wednesday morning, is also expected to update the cabinet.

Meanwhile, one senior EU diplomat has told journalists in Brussels it is now too late for EU leaders to formally approve a revised Brexit deal at the summit.

They said the most they could do was give a provisional thumbs-up – “a political yes” – to whatever emerges from the talks pending the release of the final legal text.

The BBC’s assistant political editor Norman Smith said there were suggestions the talks had gone as far as they could “unless and until” the PM could bring the Democratic Unionists on board.

The DUP are due to issue a statement later, following their latest round of talks in Downing Street.

After a 90-minute meeting on Tuesday, they said “it would be fair to indicate gaps remain and further work is required”.

The party’s Brexit spokesman, Sammy Wilson, said any customs agreement must be subject to the consent of unionists and nationalists before it comes into force under the terms of the 1998 Good Friday Agreement, which established Belfast’s power-sharing arrangements.

Thursday’s summit is crucial because under legislation passed last month – the Benn Act – Mr Johnson is compelled to ask the EU for a delay to Brexit if he does not get a new deal approved by MPs by Saturday.

Brexit Secretary Stephen Barclay told MPs on Wednesday that Mr Johnson “will comply with the law” regarding the terms of any further extension.

Following his call with the PM, and amid reports the EU could organise another summit next week if necessary, Mr Varadkar suggested there was still “more time” for a breakthrough.

“There is a pathway to a possible deal but there are many issues that still need to be fully resolved, particularly around the consent mechanism and also some issues around customs and VAT,” he said at an agri-food event in Dublin.

“I do think we are making progress, but there are issues yet to be resolved.”

What is happening today?

Former Brexit Secretary David Davis said the support of Tory Eurosceptics could not be taken for granted and MPs would subject any agreement to “two or three key tests” – including whether it compromised the future of the United Kingdom.

“Quite a lot of Tory MPs will take their line from what the DUP say,” he told BBC Radio 4’s Today. “If the DUP say this is intolerable, that will be quite important.”

Former Northern Ireland Secretary Owen Paterson has already expressed unease about reports of what could be in the agreement, telling the Sun a customs border down the Irish Sea would be “unacceptable”.

There are all sorts of briefings, but there are very few briefings from the people who have direct knowledge of the conversations taking place.

What I am not hearing is that the DUP have signed up to the latest proposals.

Arlene Foster and Nigel Dodds were in Downing Street this morning.

As I understand it, they did not leave thinking this issue of consent had been sorted.

This is not over, this is not done, but crucially it is still ongoing.

No one is upping stumps just yet.

If Mr Johnson gets an agreement, he is likely to ask MPs to back it and agree the next steps in an emergency sitting of Parliament on Saturday.

Ministers have yet to confirm the sitting – which would be the first on a weekend for 37 years – will happen, saying it would depend on events in Brussels.

Meanwhile, a cross-party group of MPs has arrived in Brussels to make the case for another extension to the Brexit process even if Parliament approves a deal on Saturday.

One of the group, ex-Conservative minister Dominic Grieve, told Sky News the PM was trying to “bamboozle” everyone into thinking the process of ratifying any agreement in UK law could be concluded by 31 October when it “plainly cannot”.

And the Liberal Democrats have tabled an amendment to the Queen’s Speech, calling for any deal to be put to voters in a referendum.

Leader Jo Swinson told BBC Breakfast the economic hit from Mr Johnson’s deal could be worse than the financial crash of 2008, and therefore it “should be up to the public to have their say”.

Saturday 19 October – Special sitting of Parliament expected – and the date by which the PM must ask the EU for another delay to Brexit under the Benn Act, if no Brexit deal has been approved by MPs and they have not agreed to the UK leaving with no-deal.

Thursday 31 October – Date by which the UK is currently due to leave the EU.