The government will abandon its Brexit bill if MPs reject its three-day timetable to pass through the Commons.

Boris Johnson told MPs if the programme was rejected and the EU confirmed a delay to the 31 October exit, he would instead push for a general election.

The PM said Parliament had been “caught in a deadlock of its own making”, and he would “in no way allow months more of this”.

But opposition MPs called the threat to pull the bill “childish blackmail”.

The Withdrawal Agreement Bill was published on Monday night and MPs are now voting on the proposed timetable.

Boris Johnson agreed his new plan with EU leaders last week, but has repeatedly pledged to leave the EU by the end of October, with or without a deal.

Opening the debate in the Commons, Mr Johnson told MPs that giving the deal – and the programme motion – their backing would “get Brexit done and move our country on”.

But he added: “If Parliament refuses to allow Brexit to happen, and instead gets its way and decides to delay everything until January or possibly longer, in no circumstances can the government continue with this.”

Mr Johnson did not say what the government would do if the EU offered a shorter extension.

However, he said MPs’ constituents would “not be fooled by any further delay” and “would not understand why it was necessary”.

The law requires 25 days between an election being triggered in Parliament and polling day – meaning were one to be called this week, the earliest it could take place would be Thursday, 28 November.

The decision to curtail the scrutiny of the bill to three days has sparked anger from opposition MPs.

Labour leader Jeremy Corbyn said his party would vote against the timetable, calling it “an abuse of Parliament and a disgraceful attempt to dodge accountability, scrutiny and any kind of proper debate”.

He said MPs were being “treated as an inconvenience that can be bypassed by this government”.

Labour’s chief whip, Nick Brown, has written to his opposite number in government, Mark Spencer, saying he was “disappointed” there was “no negotiation or attempt… to seek an agreement” on the timetable for the bill.

He added: “I remain available at any point to seek a consensus with you on a programme motion that would command the support of all sides of the House.”

The Liberal Democrats’ spokesman for Brexit, Tom Brake, criticised the threat of pulling the bill if the government lost the vote on the programme motion, saying: “MPs shouldn’t be bullied into voting in favour of this ridiculously short timetable.”

And the SNP’s Westminster leader Ian Blackford said: “In what is an absolutely fundamental piece of legislation that is going to effect all of us, our children and our grandchildren for decades to come, we must have proper scrutiny and we must be able to tease out the facts of the matter.”

But Tory Brexiteer Iain Duncan Smith said “those that say they don’t have enough time because there are so many things to debate” should remember that a white paper that “contains most elements” of the deal was published and debated last year.

“Most things have not changed,” he added.

Will the EU offer an extension?

Earlier, ministers insisted they were confident they had the numbers to get the Withdrawal Agreement Bill approved, despite losing a crunch Commons vote on Saturday aimed at ruling out a no-deal Brexit.

This defeat led to the PM being forced to write a letter to the EU asking for an extension – but Mr Johnson wrote a second letter outlining his opposition to further delay.

European Council President Donald Tusk told the European Parliament in Strasbourg on Tuesday he was consulting the 27 EU leaders on how to react to the UK’s request for a Brexit delay and “will decide in the coming days”.

“I have no doubt that we should treat the British request for extension in all seriousness,” he tweeted.

What is in the Withdrawal Agreement Bill?

The 110-page document will give legal effect to the withdrawal deal negotiated by Mr Johnson.

His plan ditches the backstop – the controversial measure designed to prevent a return to physical checks on the Irish border.

Instead it essentially draws a new customs border in the Irish Sea, as goods which could travel onwards to Ireland will have to pay a duty tax.

It also will see the whole of the UK leave the EU customs union, meaning it could strike trade deals with other countries in the future.

The WAB will also turn any agreed transition period into law, fulfil requirements on the rights of EU citizens in the UK after Brexit, and allow ministers to make “divorce payments” to the EU foreseen under the current deal.

Other areas the bill covers include:

For more detail on the bill, read our BBC Reality Check piece here.

MPs will be able to vote on amendments – changes or add-ons – to the bill.

If the government cannot get the bill through Parliament, the default legal position is for the UK to leave without a deal on 31 October, but that will change if the EU grants an extension.

What is the plan for the rest of the day?

Following the opening speeches from Mr Johnson and opposition leaders, MPs debated the bill in what is called its second reading.

The debate continued until 19:00 BST and now MPs are voting on whether to give the deal its first nod of approval.

If it wins their backing, the programme motion will then be voted on to secure the three-day timetable.

It is not entirely clear exactly what happens if the motion is rejected, but if it passes, the WAB moves straight into the line-by-line scrutiny of the committee stage, which can continue until 22:00.

What about the rest of the week?

If the WAB starts committee stage on Tuesday, it will continue throughout Wednesday.

Amendments to the bill will be laid and chosen by the Speaker, such as plans for a customs union or confirmatory referendum on the deal.

Thursday will then be used for the report stage and third reading.

And if it all gets wrapped up in the Commons, the bill will head to the Lords for approval.

But this is all dependent on the government having enough support for the second reading and the programme motion on Tuesday.

Without that, we could see the rest of the week dominated by attempts to force a general election. 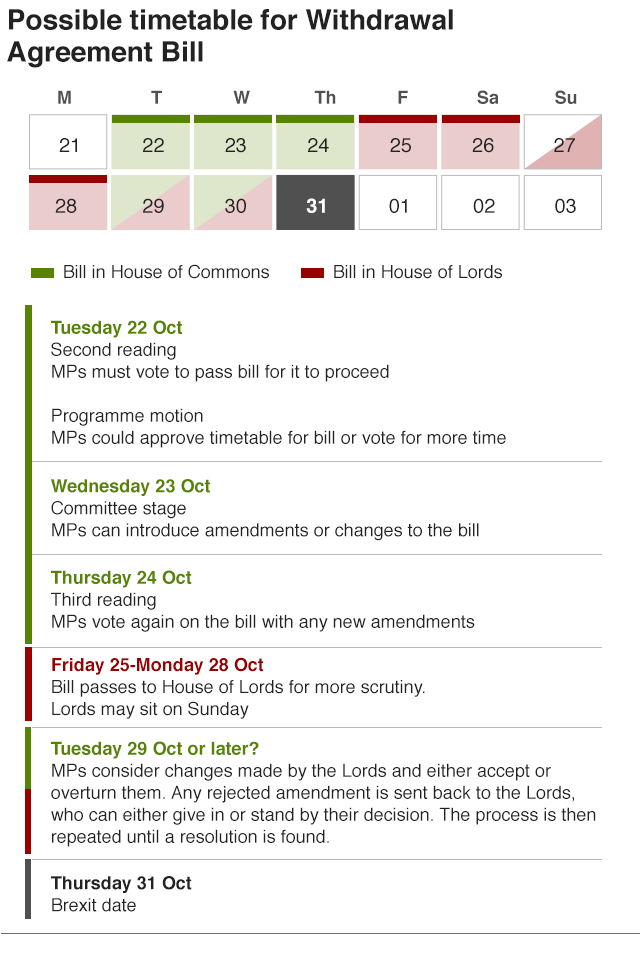