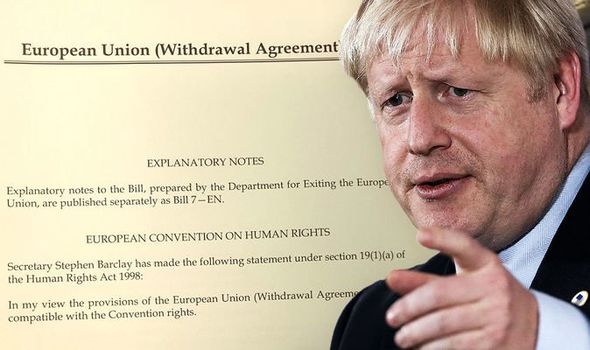 Boris Johnson has urged MPs to back his Withdrawal Agreement Bill, which he wants to get passed in time for Britain to leave the EU with a deal at the end of this month.

Sky News examines why the legislation has become the latest battleground in the process of the UK’s departure from the bloc.

The Withdrawal Agreement Bill (or WAB, as some refer to it) is the legislation which enshrines the PM’s Brexit deal into law.

There are a number of elements to it, but the main things it includes are:

The withdrawal agreement and the Withdrawal Agreement Bill are two separate things.

The withdrawal agreement is what the prime minister renegotiated with Brussels and got EU leaders to endorse at a summit last week. It sets out the terms for Britain’s departure from the EU.

Mr Johnson wanted to put it to a vote of MPs at the weekend, but saw his plans suffer a major setback.

MPs backed an amendment which saw them withhold support for the PM’s deal, unless and until he has passed all necessary legislation to implement it.

Having come to office pledging to deliver Brexit at the end of this month, Mr Johnson formally requested a three-month delay on Saturday.

He was legally required to ask for this under the so-called “Benn Act” – the legislation passed by opposition MPs in September to prevent a no-deal Brexit.

On Monday, Speaker John Bercow rejected the PM’s attempt to stage a straight yes/no vote – a so-called “meaningful vote” – on the deal, as he cited a centuries-old convention.

In the wake of Saturday’s setback and the Speaker’s ruling, the government has moved to introduce the WAB.

The aim is to swiftly pass it into law and try to stick to the 31 October Brexit deadline.

MPs have been set a three-day timetable to consider the 115-page draft legislation, which comes with 125 pages of accompanying notes.

Later on Tuesday, at 7pm, the bill will have its second reading.

This stage in the parliamentary process is a chance for MPs to express their view on the principle of a bill – what it’s about and what it is designed to achieve.

After that there will be a vote on what is known as a programme motion, the timetable for the bill mentioned above.

These two votes will likely determine whether Mr Johnson will be able to stick to his “do or die” commitment to delivering Brexit on 31 October.

House of Commons Leader Jacob Rees-Mogg told MPs on Monday: “People who don’t vote for the programme motion will be voting not to have Brexit on 31 October and they will need to understand that clearly.”

The expectation is that the government will win the vote on the second reading, but the outcome of the ballot on the programme motion is far from certain.

There is anger among opposition parties at the amount of time MPs have been given to scrutinise the legislation.

They argue that three days is simply not enough time to consider such an important bill.

“Ministers are trying to bounce MPs into signing off a bill that could cause huge damage to our country. We can’t trust this prime minister.

“The truth is Boris Johnson knows that the more time people have to read the small print of his deal, the more it will be exposed for the risks it represents to our economy and communities across the country.”

If the government wins both votes tonight, the WAB will continue its passage through parliament on Wednesday and Thursday.

This is when amendments to the bill will be considered.

This could include attempting to add an obligation for Mr Johnson to agree a customs union with the EU or put his deal to a referendum vote.

The SNP have already tabled an amendment seeking to block the WAB being passed and for there to be a snap election.

Former Tory MP Nick Boles, who now sits as an independent, has put down an amendment which would require the government to seek an extension to the transition period from December 2020 to December 2022.

This is, in his words, “essential to stop hardline ERG [European Research Group] members forcing through No Deal Brexit in Dec 2020”.

If the government loses, the PM has told MPs that he will pull the bill altogether.

Mr Johnson will then push for an election as soon as Brussels grants a Brexit extension.

But under the Fixed-Term Parliaments Act, MPs need to vote for an early election to allow one to take place.

Mr Johnson has twice before tried and failed to get the Commons to back a snap poll.

Opposition parties refused to support the moves because they wanted to remove the prospect of a no-deal Brexit at the end of this month.

With the deadline pushed back even further, they should in theory agree to an early election. But this is not a certainty.