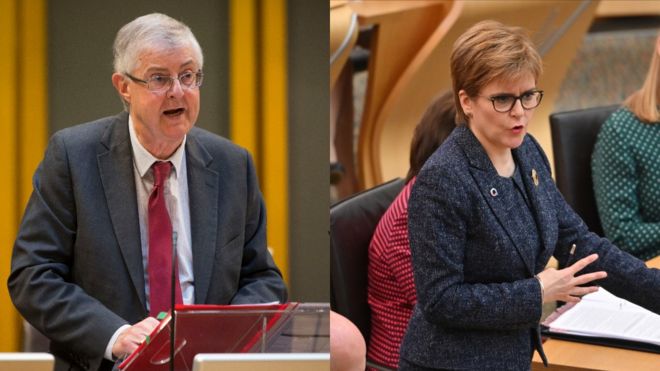 The first ministers of Wales and Scotland have both said they would welcome a general election.

But Nicola Sturgeon and Mark Drakeford said they wanted to see the details of any Brexit extension before backing a vote before Christmas.

Ms Sturgeon said it was important to ensure the risk of no-deal had been removed.

They were speaking at a news conference in Westminster where they joined forces to oppose Boris Johnson’s Brexit Bill.

The pair accused the UK government of trying to rush through the EU Withdrawal Agreement without scrutiny.

The first ministers urged the prime minister Boris Johnson to allow more time for the bill, after he “paused” his Brexit bill when the Commons rejected his plan to get it signed off in three days.

Ms Sturgeon and Mr Drakeford said the Scottish Parliament and Welsh Assembly were likely to refuse to give consent for the Withdrawal Agreement Bill, and called for the devolved nations to be given a greater say.

In the Commons, however, the prime minister has said the Scottish Parliament “has no role” in approving his deal.

Ms Sturgeon and Mr Drakeford agreed there should be adequate time to scrutinise the bill if it proceeds – with Ms Sturgeon saying that must be a “decent, proper period of time”.

Ms Sturgeon told the conference it was “almost certain” the UK would not leave the EU on 31 October, but added “the reprieve is currently only a temporary one”.

Mr Drakeford echoed her sentiments and warned that the Withdrawal Agreement Bill may be “in limbo or in purgatory”, but was “not yet dead”.

Nicola Sturgeon declared: “I want to see a general election. I would be very happy to see that general election before Christmas but the circumstances of that have to be such that it doesn’t open the risk of a no-deal Brexit.

“And I think all responsible opposition MPs who want to see an election have a duty to make sure that that is the case.”

The Welsh first minister said: “I have always been agnostic on whether a general election or a referendum is the best way to get this decision put back in the hands of the people.

“But I’ve never been anything but clear that that should be the end, the end objective.”

He added: “What I want to see is this decision put back in the hands of the people who made it in the first place.

They welcomed the UK parliament’s decision on Tuesday to reject the UK government’s timetable of scrutiny of the Withdrawal Bill.

The two first ministers have jointly written to Boris Johnson and the president of the European Council asking for an extension to give more time to scrutinise the bill.

“The way in which the prime minister sought to bully parliament into accepting it was shameful,” Ms Sturgeon said.

She added: “Nobody voted to have the core principles of devolution trampled over in a stampede to get out of the EU come what may.”

Wales voted 52.5% to leave in the EU referendum, while Scotland voted by 62% to remain.

On Tuesday, the Senedd passed a motion saying they would oppose the bill.

Mr Drakeford said the Welsh government had a “critical interest” because many of the provisions of the bill touched on devolved matters.

He said that having asked the Senedd to give consent “the government here in London must respect both the time we need to consider the bill properly and to respect the decisions of devolved parliaments on that question of consent”.

He added it was a “bad deal” for Wales and the whole of the UK, calling it “absolutely unacceptable to the Welsh government”.

Mr Drakeford said that he “could not encourage any MP to vote for it because of the damage it would do to Wales”.

He warned it would mean lost jobs, investment and income for families and would have an impact on Welsh manufacturing and the agrifood sector.

Brexit extension must be ‘long enough’

Ms Sturgeon said an extension should not just give time to “scrutinise a bad bill for a week or two longer”, but long enough to secure a general election or referendum, “or perhaps… the former leading to the latter”.

She confirmed her government would not recommend consent when MSPs considered the legislation.

Ms Sturgeon added: “If this legislation does proceed the consent of the Scottish Parliament and Welsh Assembly will be required. The UK government has explicitly accepted that fact.”

At Prime Minister’s Questions on Wednesday, however, Boris Johnson rejected the idea that the approval of devolved parliaments was necessary.

He said: “The Scottish Parliament has no role in approving this deal.

“On the contrary, it is up to the members of this Parliament to approve the deal.”

Since 1999, UK governments have followed the Sewel convention that the UK parliament will not normally legislate with on devolved matters without the consent of the devolved parliaments.

But in 2017 the Supreme Court ruled that since it is a political convention, enforcing it is not a matter for the courts.

The prime minister told MPs on Tuesday he would “pause” the Withdrawal Agreement Bill until the EU took a decision on whether to grant another extension to the current Brexit deadline of 31 October.

Mr Johnson added: “Let me be clear. Our policy remains that we should not delay, that we should leave the EU on 31 October and that is what I will say to the EU and I will report back to the House.

“And one way or another we will leave the EU with this deal, to which this House has just given its assent.”