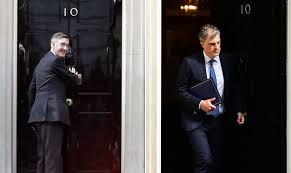 Boris Johnson is facing a major Tory split over whether to push for a pre-Christmas general election or to try to get his Brexit deal through parliament.

Serious divisions have opened up among senior cabinet ministers, the prime minister’s inner circle and Conservative MPs over whether to go for a snap poll.

The splits have emerged as Mr Johnson awaits a response from the European Council president Donald Tusk to his request for a Brexit extension, which is expected on Friday afternoon.

Labour MPs, whose support for a general election will be crucial, are also deeply divided, with many opposed to an early poll because they fear Mr Johnson will impose a no-deal Brexit.

An early election would either require a vote of no confidence in the government in the Commons or a vote under the Fixed Term Parliament’s Act, which would need a two thirds majority.

One senior Opposition MP told Sky News that the government’s Chief Whip, Mark Spencer, had told MPs a potential election date was Tuesday 10 December, with a Queen’s Speech in the New Year.

In the cabinet, Northern Ireland Secretary Julian Smith, the former Chief Whip, is said to favour trying to pass the EU Withdrawal Bill and is claimed to have told MPs a dash to the polls would be “nuts”.

But hardline cabinet Brexiteers led by the Commons Leader Jacob Rees-Mogg are said to be urging the prime minister to abandon the Bill and instead hold an election before Christmas.

Mr Smith and other ministers believe the majority of 30 achieved by the government on the second reading of the Brexit bill on Tuesday suggests Johnson’s deal has enough support get through the Commons.

Inside Downing Street, the drive for a quick election is being led by the Prime Minister’s controversial adviser Dominic Cummings, Westminster’s favourite pantomime villain.

A senior MP told Sky News that at a meeting between Mr Johnson and Jeremy Corbyn just before Prime Minister’s Questions Mr Cummings threw his hands up in the air and told the PM to stop when he asked Mr Corbyn how long Labour wanted for the Bill’s committee stage.

But Mr Johnson’s veteran aide Sir Eddie Lister, regarded by senior Tory MPs as a steadying influence on the prime minister, is said to favour passing the withdrawal Bill before going to the country in an election.

Some senior Tory MPs have also told Sky News they are opposed to an early election and there are claims that Conservative backbenchers are split 50-50 on an early poll or ratifying the prime minister’s deal.

And one MP told The Guardian: “I’d rather we focused more on passing the Bill. It would be better to go to voters having finished the job. I feel that’s what most colleagues want.”

But Mr Rees-Mogg is said to be worried that the 19 Labour rebels who backed the Bill in the second reading vote this week will decide to support amendments during its committee stage, on issues like customs, a second referendum or blocking no-deal.

The Tory high command also fears that Conservative MPs in the hard Brexit-supporting Eurosceptic European Research Group will fail to support the Bill in the final Commons vote, the third reading, if amendments on customs are passed in the committee stage.

Amid the Tory turmoil, the bullish faction inside Downing Street a source was quoted as saying: “Any time that parliament gets a vote for delay, it will always choose delay. Therefore, if this parliament is unwilling to vote for a deal, we will have to go for a general election.”

MPs fears of a no-deal Brexit were heightened when Mr Johnson told Mr Tusk and the German Chancellor Angela Merkel in phone calls that despite the UK’s request for an extension beyond 31 October the PM remained opposed to a delay.

“The PM was clear in restating his position that he does not believe that any delay beyond 31 October is in the interests of the UK or the EU and that we need to get the deal through parliament before that point,” the PM’s spokesman said.

One Tory MP claimed that Mr Johnson had told backbenchers in the Commons Tea Room that he had urged French President Emmanuel Macron to veto an extension beyond his “do-or-die” deadline of 31 October.