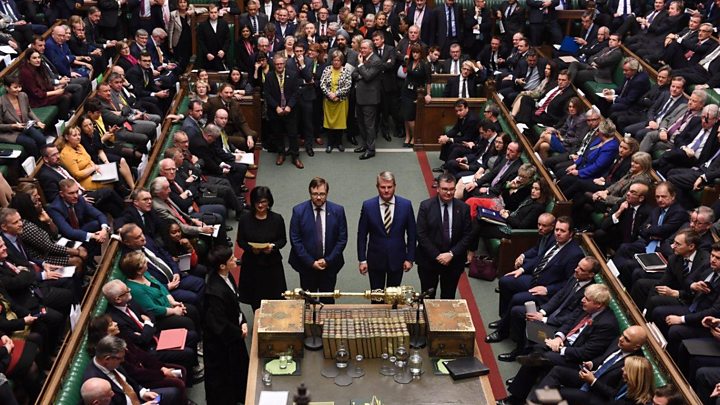 MPs are set to give their blessing to Boris Johnson’s plan for an early general election on 12 December.

Legislation paving the way for the poll has already cleared its first hurdle and the final vote is due shortly.

MPs have rejected an attempt by Labour to change the date to 9 December by a margin of 315 votes to 295.

Efforts by opposition MPs to lower the voting age to 16 and allow EU nationals to take part have failed.

Proposed changes to the PM’s early election bill to extend voting rights were not selected for debate by the Deputy Speaker despite enjoying cross-party support.

It removes one major potential obstacle to a pre-Christmas poll as No 10 had said it would abandon the legislation needed for it if the franchise was altered at such a late stage.

One change that is being considered is a call by Labour – backed by the other opposition parties – to hold the poll three days earlier on 9 December.

This, they argue, would ensure that university students are more likely to be able to take part because it would still be in term time.

But the government has been digging in over the 12 December date – saying only this will guarantee enough time for Parliament to pass crucial legislation relating to Northern Ireland before it is dissolved next week.

MPs are expected to vote on the issue of the date shortly before being asked to give their final approval to the legislation at about 20:00 GMT.

With an election on the horizon, Mr Johnson has moved to heal wounds in the party by restoring the whip to roughly half of the 21 Tory MPs disciplined in September for rebelling over efforts to block a no-deal Brexit.

It means they are free to stand as Conservatives in their constituencies if new candidates have not since been chosen. Some of the 10, including Sir Nicholas and Mr Burt, have previously said they would be retiring.

However, former chancellors Ken Clarke and Philip Hammond and former justice secretary David Gauke have not been brought back into the fold.

When will we know if there will be an election?

It should become clear shortly whether there will be the first December general election since 1923.

The government is aiming to complete all the Commons stages of a bill paving the way for the election by the end of the day – a process that normally takes several days.

There was no formal vote at second reading – when MPs approve the principle of legislation – after Commons Speaker John Bercow decided those shouting “aye” were in the majority.

If MPs back the bill at its final Commons stage, then it will move to the House of Lords, where it is not expected to encounter significant opposition. It could then receive Royal Assent by the end of the week, meaning it has passed into law.

If the bill is passed unchanged, Parliament will be dissolved on 6 November ahead of what is set to be a five-week campaign.

Labour has, against the wishes of many of its MPs, shifted to supporting a December election and with that, it means we are on for the first December general election in decades.

The prime minister hopes this will give him a victory at the polls that would allow him rapidly to get his Brexit deal through Parliament and the UK out of the EU.

The Labour leader hopes for a souped-up version of his move forward at the 2017 election that would mean, contrary to the view of many of his own MPs, his project can continue and build.

The Lib Dems and SNP hope for a chance to stop Brexit happening, and expand their own political positions at a junction for the country.

But none of the parties can be remotely sure of what will happen next.

What is the government’s plan?

If the bill passes, the PM is expected to address Tory MPs soon after in Westminster.

Speaking earlier in the Commons, he claimed an early election was the inevitable consequence of Parliament’s decision to thwart his Brexit bill.

He said only a “refreshed and revitalised” Parliament could implement the 2016 referendum result and opposition to an election had “begun to crack” in the past few days.

It would be fourth time lucky for Mr Johnson, who has previously failed on three occasions to get Parliament’s approval for an election.

Crucially, the legislation the PM is now proposing requires only a simple majority of MPs while, in the past, he has sought to use the Fixed-term Parliament Act, which requires the support of two-thirds of all 650 MPs to go through.

What has Labour said about an election?

Mr Corbyn cleared the way for an election after a meeting of the shadow cabinet when he said the “time for debate was over”.

He was cheered by members of his top team, as he made his announcement at Labour’s campaign headquarters in central London.

He said: “I have consistently said that we are ready for an election and our support is subject to a no-deal Brexit being off the table.

“We have now heard from the EU that the extension of Article 50 to 31 January has been confirmed… We will now launch the most ambitious and radical campaign for real change our country has ever seen.”

However, not all Labour MPs are on board, with Ben Bradshaw saying it was a “bad mistake” and calling instead for another referendum on Brexit.

His fellow backbench MP, Barry Sheerman, tweeted that it was “sheer madness” to hold a December election “on Boris Johnson’s agenda”.

Where do the other parties stand?

The SNP’s Westminster leader Ian Blackford said a strong performance by his party would bring Scottish independence a “step closer”.

Both his party and the Lib Dems want to fight the election on a platform of stopping Brexit entirely.

Lib Dem leader Jo Swinson said an election was the only way to do this, given there was not enough support in Parliament for another referendum.

But one of the party’s latest recruits, Heidi Allen, has criticised the position and announced she will not stand in the next election.

Both The Independent Group for Change, which has five MPs, and Plaid Cymru, which has four MPs, have said they will vote against an election and instead continue to support a so-called “People’s Vote” – or further referendum on Brexit.

Some former Conservatives are also against an election too.

Former Chancellor Philip Hammond – who was expelled from the Conservative parliamentary Party after voting against a no-deal Brexit – said the idea of using “precious time” to hold an election, rather than passing the government’s Brexit bill, “frankly appals me”.

The Democratic Unionist Party, which has 10 MPs, says it does not fear an election but would not vote for anything that may take Parliament closer to approving the PM’s Brexit deal.