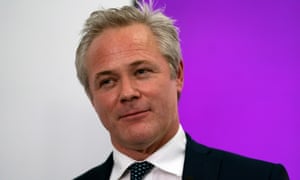 UKIP leader Richard Braine has resigned saying he had not joined the party “to waste time on internal conflict”.

Mr Braine was elected leader in August 2019, making him the party’s eighth different leader since the Brexit referendum in 2016.

He said he had wanted to unite the party but had been met with “pre-emptive opposition”.

UKIP has yet to comment but it’s understood the party intends to appoint an interim leader shortly.

The party has struggled to make an electoral impact in recent years, losing all its MEPs to The Brexit Party led by former UKIP leader Nigel Farage.

Mr Braine’s resignation comes a week after he was suspended by UKIP over allegations of data theft, which he denies.

In a letter, Mr Braine said he had been been “prevented from building a successful leadership team by blocked appointments”.

“I did not join UKIP in order to waste time on internal conflict, but I have found myself powerless to prevent a purge of good members from the party.

“I had believed that UKIP was a highly democratic party, but I have not been able to stop political interference in UKIP ballots.

“I can not therefore stand publicly for UKIP with a clear conscience.”