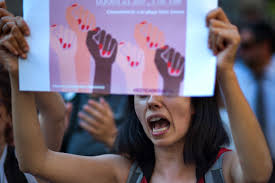 Spaniards are continuing to voice outrage after five men were acquitted of rape and sentenced them to 10-12 years, guilty of the lesser crime of sexual abuse, on the grounds that their 14-year-old victim had been unconscious at the time.

The Barcelona-based court ruled that it could not be considered sexual assault since the girl was unconscious after consuming alcohol and drugs and so there was no violence or intimidation, a requirement for a rape conviction in Spain.

Deputy prime minister, Carmen Calvo, said that while the government does not comment on court decisions it has put forward a priority modification to the law to makeclear consent’ necessary for future cases.