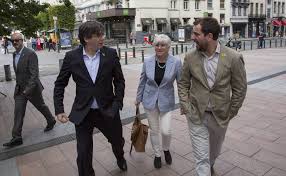 Three former members of the Catalan regional government who fled Spain after the unilateral independence declaration of October 2017 have said they will hand themselves over to local authorities as soon the European arrest warrants issued by Spain’s Supreme Court are received.

Toni Comín and Lluís Puig fled to Belgium with Carles Puigdemont, the ex-premier who led the failed breakaway bid from Spain, while Clara Ponsatí went to Scotland.

Spain’s Supreme Court reactivated European arrest warrants against the three after handing down a decision last month in the trial of 12 other leaders of the 2017 secession bid.

Nine of these received prison sentences for sedition and misuse of public funds.

Now the court is hoping that the separatist leaders who fled the country will be returned to Spain so they can face the same legal proceedings.

The international warrants have also been sent to Interpol in case any of them attempt to move to a non-European Union country.