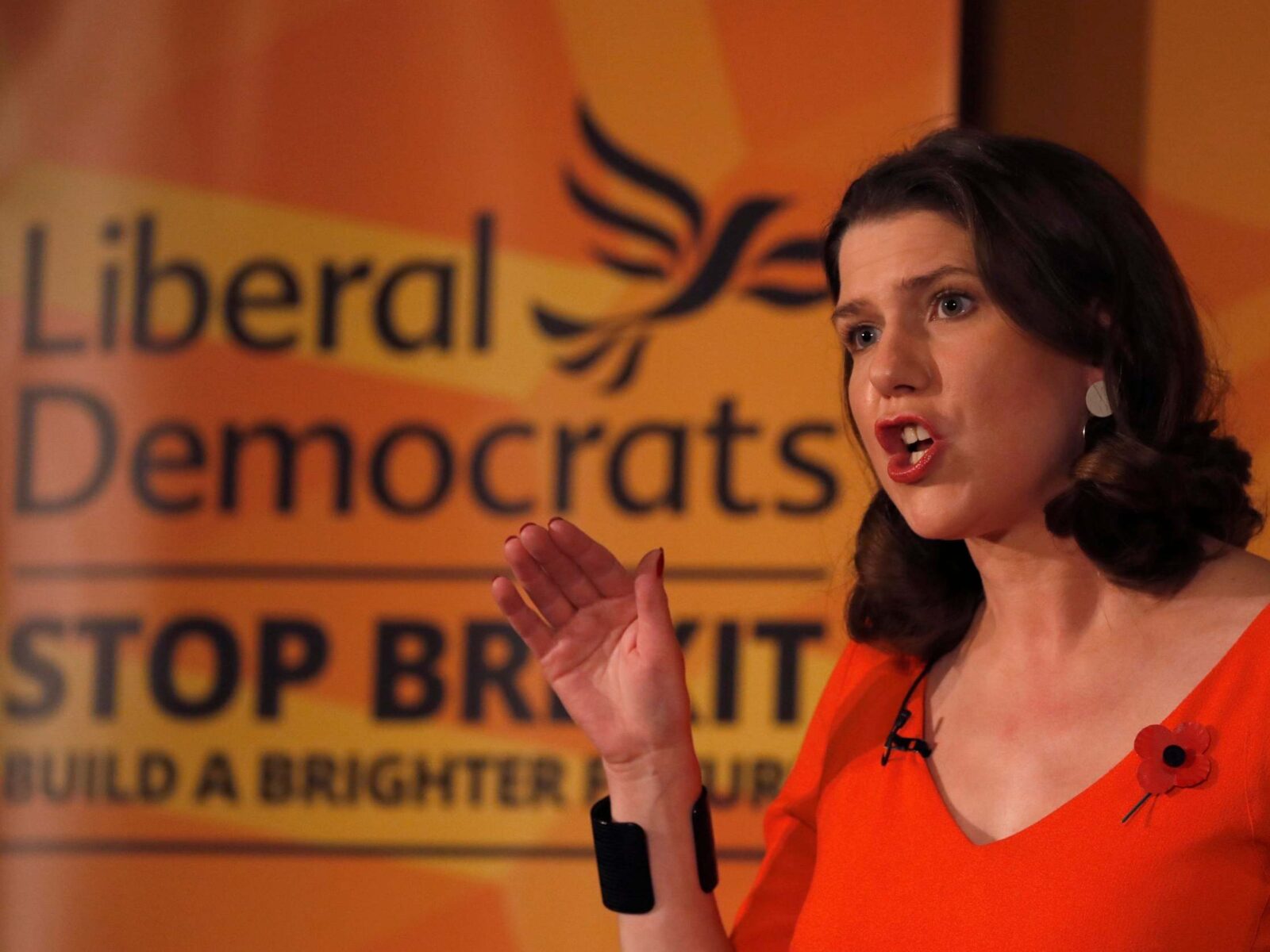 The general election could be “a moment for seismic change”, when “a new and different politics” emerges, Lib Dem leader Jo Swinson has said.

In a speech at the party’s campaign launch, she said she could do “a better job” than either Boris Johnson or Jeremy Corbyn as prime minister.

In response, the Conservatives said a vote for the Lib Dems “risks putting” Mr Corbyn into Downing Street.

The UK will go to the polls on 12 December.

Elsewhere in the election campaign:

The political parties are ramping up their campaigning, ahead of the official start to the five-week election period at just after midnight on Wednesday.

On Tuesday, the Lib Dems said they would take legal action against ITV over its plans for a head-to-head election debate including only Boris Johnson and Jeremy Corbyn, saying the decision to exclude its leader was “outrageous”.

The party’s lawyers have written to the broadcaster to give it “the opportunity to correct this serious mistake”.

Speaking in London, Ms Swinson said: “Our country needs us to be more ambitious right now – and we are rising to that challenge.

“It is not about the red team or the blue team, because on this issue they merge into one – both Labour and the Conservatives want to negotiate and deliver Brexit.

“I never thought that I would stand here and say that I’m a candidate to be prime minister, but when I look at Boris Johnson and Jeremy Corbyn, I am absolutely certain I could do a better job than either of them.”

Ms Swinson said Mr Johnson had “lied to the Queen, lied to Parliament and lied to the country” and “was not fit to to be prime minister”.

And she accused the Labour leader of failing to “give a straight answer on the biggest issues facing this country”.

The Lib Dems currently have 20 MPs – out of a possible 650 – and they are especially hopeful of gaining seats in London and south-west England, but they would need a dramatic shift in the electoral landscape if they were to win a majority.

However, responding to questions from journalists, Ms Swinson said “stranger things have happened” and pointed to the SNP’s success in the 2015 general election.

Jo Swinson says she wants to be prime minister – but how credible is that?

The Lib Dems are not at the moment even the third largest party in the UK.

Ms Swinson cites the example of the SNP surge in 2015, when the party won almost every seat in Scotland – and she personally lost her seat to the SNP candidate.

She argues that politics is volatile, it is in flux, and things have changed because of Brexit – people are voting for very different reasons. Therefore, there is no reason why the party can’t be incredibly ambitious, she argues.

But the problem for the Liberal Democrats is that the way their votes are distributed around the country, it is much harder for them to win seats than for other parties.

The Lib Dem leader was introduced by one of the party’s newer MPs, Luciana Berger, who used to be in the Labour Party but quit over the issue of anti-Semitism – something Ms Swinson accused Mr Corbyn of failing to “root out”.

Asked whether her party could support a Labour government in the event of a hung Parliament, Ms Swinson said: “I am absolutely, categorically ruling out Lib Dem votes putting Jeremy Corbyn in No 10.”

The Lib Dem leader said her party was “the only party standing up to stop Brexit and build a brighter future for the UK”.

The Liberal Democrats have pledged to cancel Brexit altogether if they win power at the next general election.

If they do not win a majority at the election they would support another referendum.

Labour’s shadow Brexit secretary, Sir Keir Starmer, told the BBC many Remain supporters were “uncomfortable” with the Lib Dems’ plan to effectively “rub out” the 2016 referendum result and believed EU membership had to be “argued for and won” in another public vote.

The party said the £50bn figure – the amount that it has calculated will be saved over the next five years by staying in the EU – is based on the UK economy being 1.9% larger in 2024-25.

It reflects the extra tax income over the next five years and is based on a 0.4% average annual boost to GDP if the UK stays in the EU.

Deputy leader Sir Ed Davey told BBC Radio 4’s Today programme that the Lib Dems “actually think these are quite cautious figures”, adding that all the independent forecasters “were clear that there will be a big boost if we stay”.

Paul Johnson, from the independent Institute for Fiscal Studies, said it was a reasonable calculation in line with their own forecasts, adding: “We could expect the economy to be bigger if we were to remain and this assumes a relatively modest effect if anything, although obviously subject to a huge amount of uncertainty”.

BBC Reality Check correspondent Chris Morris said the vast majority of forecasts do expect the economy would be bigger if the UK were to stay in the EU.

But he said the size of that “bonus” cannot be predicted with any certainty, and £50bn was not a hugely significant amount in terms of overall government expenditure.