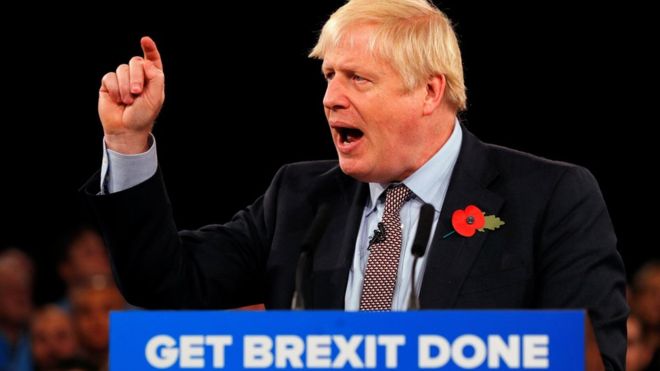 Boris Johnson has launched the Conservative Party’s election campaign, saying his Brexit deal “delivers everything I campaigned for”.

Surrounded by supporters holding signs with messages including “Get Brexit Done”, he told activists he had “no choice” but to hold an election.

Parliament is “paralysed” and “blocked”, he said in Birmingham.

He said once Brexit was done, a Tory government could get on with “better education” and “better infrastructure”.

Earlier, the prime minister met the Queen at Buckingham Palace, marking the official start of the election period in the run-up to the 12 December poll.

But Mr Johnson’s plans to grab the headlines for his party’s campaign launch were blown off course by the resignation of a cabinet minister – an unusual event during an election campaign.

Welsh Secretary Alun Cairns has quit the cabinet after claims he knew about a former aide’s role in the “sabotage” of a rape trial.

It comes after two Conservative candidates were forced to apologise for comments about victims of the Grenfell tragedy.

Opening the party’s campaign launch, the Mayor of the West Midlands, Andy Street said the party’s success in the area showed “when Conservatives work together at all levels we can do tremendous things”.

And Conservative Party chairman James Cleverly said: “We need to break the Brexit deadlock and get on with delivering on voters priorities – something the last Parliament proved incapable of doing.”

Mr Johnson told the audience the deadlock over Brexit had been like a “bendy bus jack-knifed on a yellow box junction [which] no-one can get round it and it is blocking in every direction”.

He said the thing he was “most proud of” during his 100 days in office was his Brexit deal.

Turning his fire on his election opponents, Mr Johnson accused the Labour Party of “always running out of other people’s money” and despite making a raft of his own spending promises, the party leader said Labour “know themselves that their policies for the economy are ruinous”.

Instead, he says voters should “come with us” and support Tory measures on education, the police and immigration.

In contrast, he said a Labour victory would result in another referendum and a second vote on Scottish independence.

“If I come back with a working majority, I will get Parliament working again.”

Elsewhere, as the starting pistol is fired on five weeks of official campaigning:

“If it sticks we’ll be fine” – hammer the core message, again and again, and plot a path to victory. That’s how one cabinet minister reckons the Tories can win.

After the last couple of extremely bumpy days for their party, they are hoping this will be a campaign where surprises are not a regular feature.

Instead, they and many of their colleagues reckon the plea for a majority to sort out the Brexit-induced mess of the last few years super fast will find resonance on the doorsteps, saying they are already hearing voters quote back the ‘”get Brexit done” slogan.

Another cabinet minister says “it’s not Parliament versus the people, it’s more positive than the pitchfork, but it feels good on the ground – we are hearing from a lot of people they do reckon it’s Parliament that’s out of touch”.

Events of the last 48 hours have shown already, as I wrote on Tuesday night, that events come crashing into parties’ hopes and fears pretty fast and knock them off course.

There is another fear among some Conservatives though. The strategy coming out of Tory HQ is crystal clear – end the political agony of Brexit, attract extra Leave voters who are fed up, while hanging on to as many of their existing seats as they can.

But, with such a Brexit-heavy message, will they – can they – do both at the same time?

Parliament was dissolved – or formally shut down – at just after midnight, meaning all MPs revert to being members of the public. Government ministers keep their posts.

The PM’s audience with the Queen lasted about 20 minutes. While the election has already been approved by MPs, the monarch still needed to sign a royal proclamation confirming the end of the last Parliament.

At his own campaign event, Mr Corbyn said he would be a “very different kind of prime minister” who “only seeks power in order to share power”.

He said Labour is “well prepared and utterly determined” to win power to “transform” the country and said recent comments by Tory candidates about the Grenfell tragedy were “shameful” and suggested his opponents felt there were “above us all”.

He said the election was a once-in-a-generation chance to “tear down the barriers that are holding people back” and to “rebuild” the NHS, schools and the police force.

The Labour leader said his Brexit strategy was to unite people, with a second referendum on a “sensible set of proposals” rather than the “disaster” of a US trade deal with Donald Trump.

Mr Corbyn has previously said a new Scottish independence referendum was not “desirable or necessary” – but the SNP’s Nicola Sturgeon said she believed Labour would give the go-ahead for one if in government.

Wednesday’s dissolution ended the shortest parliamentary session since 1948, with the Commons having met for only 19 days since the state opening on 14 October.