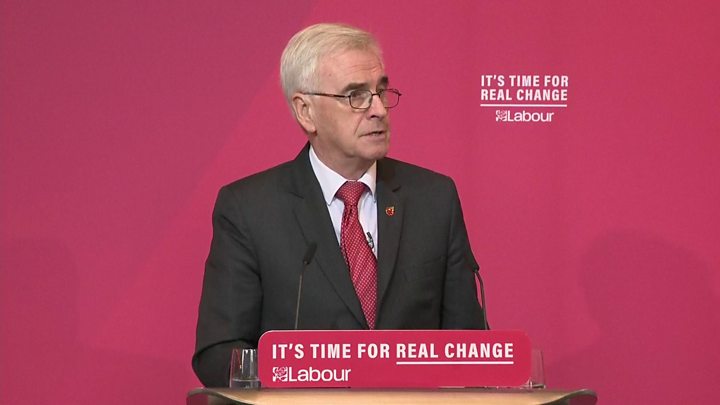 Labour has promised “investment on a scale never seen before” to overhaul infrastructure in all areas of the UK.

Shadow Chancellor John McDonnell says he wants to transfer power and money out of the south-east of England – and will fund his plans through borrowing.

The Tories have also vowed to borrow to fund more spending, rewriting their current financial rules.

But Liberal Democrat Treasury spokesman Ed Davey warned that both parties were “writing promises on cheques that will bounce”.

Labour and the Conservatives say they want to take advantage of historically low interest rates to spend more on transport, hospitals and other infrastructure projects.

They are locked in a battle for votes in the Midlands and north of England in swing seats that could decide who forms the next government on 12 December.

Both parties are also promising to shift power and control of spending out of London – but they have different ideas about how to do that.

Speaking in Liverpool, Mr McDonnell promised to set up a Treasury unit in the north of England to take spending decisions out of Whitehall.

The Conservatives have promised to give the north of England more control over its railways, greater powers for some elected mayors and a new economic development body.

The campaign speeches over investment come as:

At the 2017 general election, Labour announced plans to set up a national transformation fund to overhaul the UK’s transport links and infrastructure.

This includes a social transformation fund, which Mr McDonnell said would now get an extra £100bn, providing a £150bn pot to be spent over the next five years.

A further £250bn of investment will be spent across the country through the Green Transformation Fund.

Mr McDonnell said the investment would help a Labour government address a “climate emergency”, as well as a “human emergency which has been created by the Tories”.

He said his party would introduce new fiscal rules, meaning “borrowing for investment” would not be included in borrowing targets.

He added the new approach would mean public assets created by infrastructure spending would be “recognised both as a cost and as a benefit”.

Both main parties now agree that this era of unusually low interest rates provides an opportunity to borrow to invest.

Both will push up the national debt.

Both argue that stepping up investment now will make the UK more productive later on.

The question, as ever, is how much will they borrow and how much debt they think the UK can support.

Labour is adding a cool £150bn to its investment plans over five years, a very big sum.

John McDonnell believes by spending on schools, hospitals and other infrastructure he would create a virtuous circle, a bigger economy which could afford the debt.

Sajid Javid would replace the Tories’ self-imposed limits on borrowing with less stringent rules, including the promise that annual investment in projects like road and rail would not exceed 3% of national output.

He says the difference between his and Labour’s plans is “like night and day” but, however they differ, debt looks set to rise.

But Mr Javid attacked Labour’s investment plans, accusing the party of wanting to “spray money round like confetti”, and indulging in “fantasy economics”.

He said the “transformation” in the economy since the Conservatives took power “was not the result of some fiscal cycle”, but “down to solid economic stewardship”.

“By far the biggest fear of business is a Corbyn-led government,” he added.

Mr Javid said his plans to increase debt as a share of national income would increase spending by “an extra £20bn a year over a five year period”.

He added that “you could easily add another £100bn to that” but the details would be set out in the Conservative manifesto.

And he said ending the uncertainty over Brexit was “the most important thing the economy needs right now”, and would “unleash” more private investment.

However, for the Liberal Democrats, Mr Davey said “any form of Brexit” would mean “less tax revenue” and would make the economy “weaker”.

“Neither Labour or the Tories can square their spending promises today with the cost of Brexit,” he said.

“In contrast, every vote for the Liberal Democrats is a vote to stop Brexit, build a brighter future and invest the £50bn Remain bonus in our vital public services and tackle inequality.”

We have got into something of a bidding war between the two parties.

The Tories are talking about extra cash for police, for upgrading hospitals, for what they call an infrastructure revolution.

John McDonnell is talking about pouring hundreds of billions for a once-in-a-generation upgrade to the country’s infrastructure.

They’re on the same terrain – they’re both talking about the end of austerity.

The risk for the government is that they might be seen as “Labour-lite” – offering something similar, but not as ambitious.