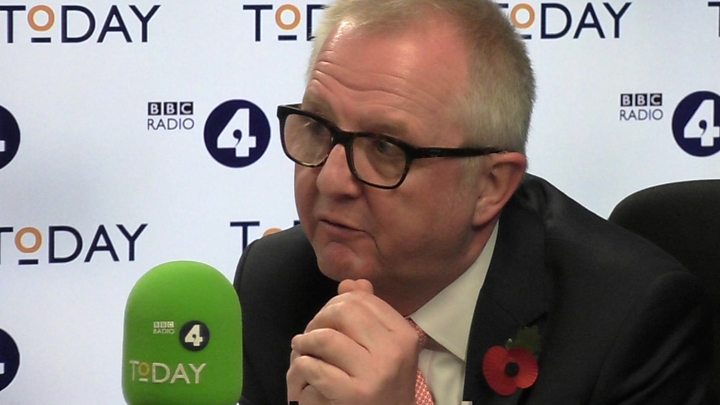 The former minister resigned from the party in February, accusing leader Jeremy Corbyn of failing to tackle anti-Semitism.

“What else do you expect him to do,” he said, “when you are employed by the Tories you speak on behalf of the Tories?”

In July, Mr Austin was appointed as Boris Johnson’s trade envoy to Israel – an unpaid role.

Another ex-Labour MP, John Woodcock, said he would be voting Conservative at the election and urged others to do the same. Mr Woodcock has been appointed as special government envoy to tackle violent extremism.

Speaking to the Express and Star newspaper, Mr Austin also announced he would be standing down as MP for Dudley North – a seat he held at the 2017 election with a majority of just 22.

He said: “I am so sorry that it has come to this, but as has always been the case, I have to do what I think is right.”

He added: “I must do everything I can to stop Jeremy Corbyn from getting into power.”

Mr Austin became a Labour councillor in Dudley in his twenties, later working as a press officer for Gordon Brown.

Mr Austin quit the party earlier this year, blaming Mr Corbyn for “creating a culture of extremism and intolerance” and accused the Labour leadership of failing to tackle anti-Semitism in the party.

His comments came after Tom Watson announced he was stepping down as Labour’s deputy leader and as an MP.

He said the decision was “personal, not political” and that he would continue to campaign for the party.

But Mr Austin said: “If Tom thought that Jeremy Corbyn was fit to lead our country and fit to form a government, then he would have been in that cabinet. Would he really be standing down?”

He said Mr Watson was “appalled” by “the scandal of anti-Semitism that has poisoned the Labour Party under Jeremy Corbyn’s leadership”.

Shadow chancellor John Mc Donnell said those who had expressed anti-Semitism accounted for “less than 0.1% of the Labour Party membership”.

Asked about the Jewish Chronicle’s front page – which urges non-Jewish voters not to support Labour – he said he was “sad about it” but insisted the party was doing “everything they asked of us” to tackle anti-Semitism.