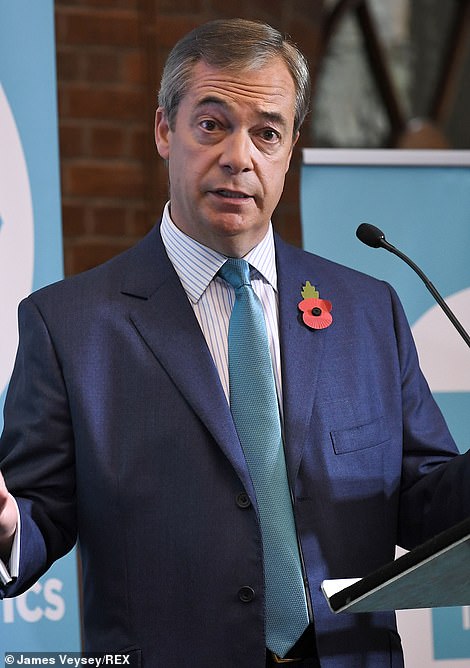 Nigel Farage has insisted he will stand candidates in Labour-held marginal seats, despite coming under pressure from the Conservatives to step aside.

The Brexit Party leader announced on Monday that his candidates would not run in seats won by the Tories at the 2017 general election.

But he told ITV his candidates would contest Labour seats as they had “turned [their] back on Brexit”.

Tory Chairman James Cleverly warned the plan posed a “danger” to his party.

Mr Farage said 300 nomination papers for his MPs had been signed off, saying he will “take the fight to Labour”.

The Brexit Party had been due to hold a rally in central London later, but a spokesman said they had cancelled it as “we have already said what we needed to say”.

The Brexit Party had planned to run candidates in more than 600 seats after Prime Minister Boris Johnson rejected an offer from its leader for a “Leave alliance” to deliver Brexit.

But facing pressure from his own party – as well as the Conservatives – not to divide Brexit-backing voters, Mr Farage confirmed his candidates would not stand in the 317 seats won by the Tories at the last election.

He told ITV’s Good Morning Britain: “I made a big, generous offer to the Conservative Party yesterday [Monday]. I gifted them a couple of dozen seats.”

Mr Farage later criticised the Tories for not reciprocating his move by standing aside in some Labour areas where the Brexit Party could challenge the incumbent.

He told the BBC: “I would have expected, having put country before party, to perhaps have got something back from the Conservatives.

“But no, nothing is good enough for them.”

He added: “It is clear to me it is not a Leave majority they want in Parliament, it is just a Tory one.”

The Brexit Party leader said the seats where the party was standing down were in areas that the Conservatives were facing “huge pressure” from the Liberal Democrats.

By giving the Tories a clear run, Mr Farage said his actions would stop more Remain MPs getting into Parliament and prevent a further referendum on Brexit from becoming a reality.

But in Labour-held seats in the north of England and the Midlands – which the Tories are targeting – it was “a very different set of circumstances”.

Mr Farage said his party would “take more Labour votes” than Conservative ones and would have a chance of winning in traditional Labour areas that would not usually vote Tory.

He also said by winning those seats, the Brexit Party would ensure Parliament had a majority of MPs in favour of leaving the EU.

“I have given more ground than anyone you have ever spoken to in the interest of putting country before party,” Mr Farage told GMB.

“I have given that ground now and I am clear we will fight against Labour and the Remainers in Parliament.”