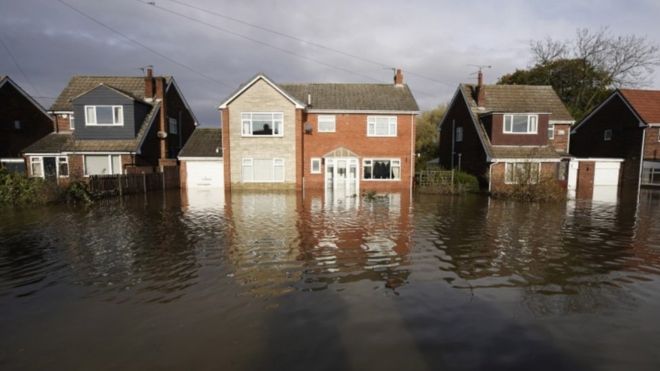 Labour and the Lib Dems have criticised the government for its handling of severe flooding in northern England.

Both have urged the prime minister to declare a “national emergency” over the floods.

Boris Johnson is chairing a meeting of the government’s emergency Cobra committee to discuss the situation.

The Environment Agency has 30 flood warnings in place as well as five severe warnings on the River Don in South Yorkshire.

About 500 homes have been flooded in Doncaster with more than 1,000 properties evacuated in areas hit by the floods.

An emergency appeal to support “displaced” families has raised more than £85,000.

The Met Office has issued yellow weather warnings for rain covering large parts of the country on Tuesday and Thursday.

It comes after downpours last week meant several areas were struck by a month’s worth of rain in a single day.

Hundreds of people in Fishlake, near Doncaster, have fled their homes after the village was submerged and the fire service said it was continuing to rescue people.

The next door village of Stainforth has been coming to the aid of those evacuated from their homes.

Fred Turner, 71, who has been helping at the community centre in the library, said he had been overwhelmed by the generosity of people.

He said someone handed him £100 cash for the flood relief fund, and children sold sweets they had collected for Halloween to raise money for victims.

“Those with the least to give have been the kindest,” he said.

He added that the villagers wanted the River Don to be dredged.

“It is a tidal river here, bringing in sand and silt from the Humber, and we have all the water coming off the hills around Sheffield,” he said.

“At high tides it is coming the other way too and Fishlake is in the middle.”

Speaking at a rally in Blackpool, Labour leader Jeremy Corbyn said the Conservative government’s response to the floods had “been woeful” and had only been triggered after he had written to Boris Johnson.

Mr Corbyn said: “If this had happened in Surrey instead of Yorkshire and the East Midlands, I think it would have been a very different story.”

Number 10 disputed this, saying the decision to hold a Cobra meeting about the response to flooding had been taken prior to the letter from Mr Corbyn.

The flooding situation at the weekend had not reached the level where a national emergency could be officially declared.

Chancellor Sajid Javid said the government was “very concerned” about the flooding in northern England and “the impact it’s having on the people there”.

Meanwhile, Liberal Democrat leader Jo Swinson arrived in Stainforth where she set out plans for a £5bn fund to improve flood defences across the UK.

She said: “It is wrong that it seems to be just down to the local communities, important though this work is; this is clearly a national emergency and the government should be declaring it as such.”

She said the current situation was an “absolute disaster” for farmers and called for a “reform on how we manage water”, adding that it was a “wake-up call” for all politicians.

What constitutes a ‘national emergency’?

The key legislation that deals with this kind of event does not refer to a “national emergency” as such, but only an “emergency” – which is an event that threatens “serious damage to human welfare”, the environment, or is a major attack, such as war or a huge act of terrorism.

The Civil Contingencies Act 2004 forces public bodies to prepare for such worst-case scenarios. In the case of the current floods, the Environment Agency, local councils and others are expected to have planned properly and to swing into action.

If an emergency is somehow overwhelming, ministers can use the Act to take control and even override existing laws and rules.

One of the catalysts for the legislation was a national fuel shortage in 2000 as protesters blockaded refineries over petrol pump prices. Were that to happen today, a prime minister could in theory order the Army to commandeer fuel tankers and keep the nation moving.

The Cobra meeting is Whitehall’s way of trying to efficiently bring together all the key people in an emergency to co-ordinate the government’s response.

Four Environment Agency pumps are in Fishlake to remove floodwater from the village.

Joe Howslam, 23, told the BBC: “I live with my parents, brother and sister, but we’ve all had to move out.

“In the history of Fishlake it’s never been this bad, according to some of the older members of our village.”

Pam Webb, who owns a spa in Fishlake, described how she lost everything she has worked for after her insurance did not cover flooding.

“I feel really selfish in saying this and I hope that other people aren’t in this boat, but I’ve lost my home and my business and my livelihood that I’ve worked so hard for.”

Tractors and boats have been used to get around the village, with many roads in the area under floodwater.

According to the Salvation Army, some people have been rescued from their homes by boat since the early hours of Saturday, but others remain in their properties, while military helicopters have been used to help boost flood defences in the area.