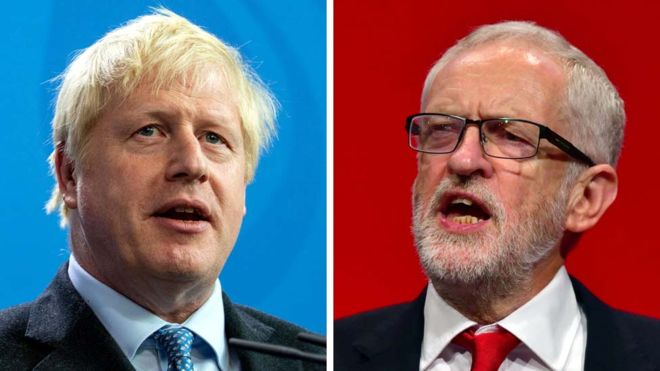 Boris Johnson and Jeremy Corbyn will face each other later in the first TV debate of the election campaign.

The head-to-head between the Conservative and Labour leaders, hosted by news presenter Julie Etchingham, will be shown on ITV at 20:00 GMT.

It comes after the Lib Dems and SNP lost their legal challenge to be included in the live programme.

They argued that their views would not be represented but judges ruled there was no breach of the Broadcasting Code.

The head-to-head is scheduled to be followed at 22:00 by interviews with party leaders, including Liberal Democrat leader Jo Swinson, reacting to the debate.

News presenter Julie Etchingham told BBC Radio 4’s Today programme that chairing the debate was a “hard thing to navigate if they won’t engage and debate with each other”.

Her role would then be to put specific points to each of them, she said, adding: “The best debates are when they debate and engage properly with one another.”

She said ITV had received hundreds of questions “across a whole range of subjects” from their viewers, so the broadcaster knows what questions the public wants answered.

This is the first time we will have just two prime ministerial candidates head-to-head.

Last time we had anything like this was in 2010 when three people were in the ring – not just Gordon Brown and David Cameron, there was Nick Clegg too and that did provide a change in the dynamic because of that brief upsurge in “Clegg-mania”.

So these debates have the potential to change the dynamic, but very often they do not.

In part, I think because both sides tend to be so well prepared, so well drilled, they are so familiar with each other’s arguments.

And we see so much of our political leaders now our views of them are pretty well grounded. It will have to be an almighty zinger or an extraordinary clanger for it to be a really game-changing moment.

In terms of choreography for tonight, half of it will be devoted to Brexit so actually that plays to Boris Johnson.

The second half will be covering absolutely everything else, from foreign affairs to the economy to education to home affairs, so the structure would seem to play to Boris Johnson.

On Monday, in London’s High Court, the Lib Dems said they wanted their pro-Remain stance to be represented, while the SNP also wanted the issue of Scottish independence to be raised.

But Lord Justice Davis and Mr Justice Warby said the case was not suitable for judicial review as ITV was not carrying out a “public function” in law by holding the debate.

However, the parties had the right to complain to Ofcom about the programme after it had been broadcast, they said.

The BBC will also host a live head-to-head debate between the Conservative and Labour leaders in Southampton on 6 December, plus a seven-way podium debate between senior figures from the UK’s major political parties on 29 November, live from Cardiff.

The Lib Dems have sent a legal letter to the BBC over its decision not to include Ms Swinson in the head-to-head.

BBC Scotland will stage a televised debate between the SNP, Conservatives, Labour and Liberal Democrats on 10 December, although the Scottish Greens have criticised the decision not to include them.