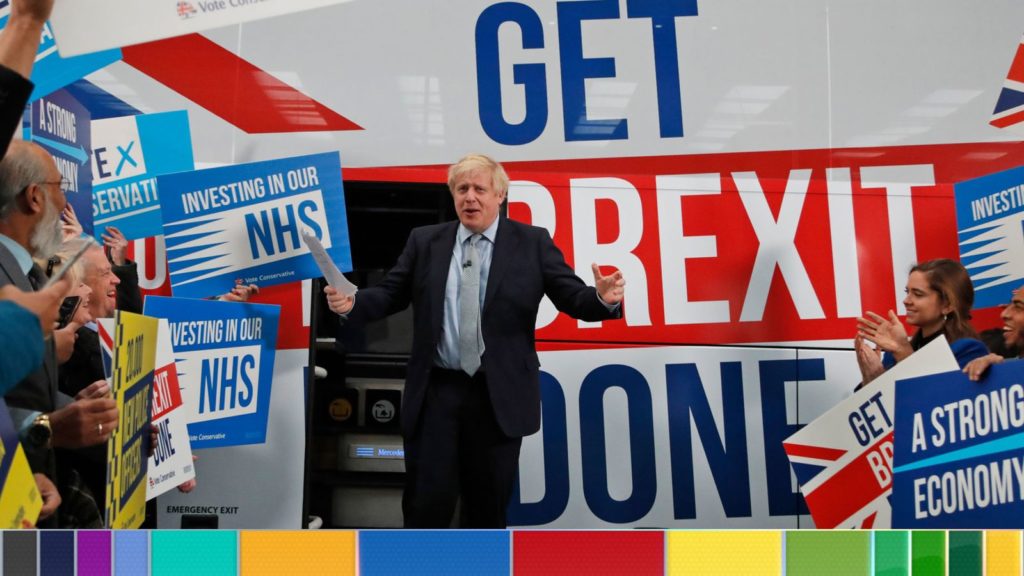 The Conservatives have pledged to cut immigration “overall”, with the “vast majority” of migrants to be required to have a job offer to come to the UK – regardless of where they are from.

High-skilled scientists and those who want to start a business will be among a small number of exceptions.
Access to benefits will be equalised between EU nationals and those from elsewhere, meaning a typical wait of five years for non-UK citizens, and benefits will no longer be sent abroad to support children outside the UK.

Ministers have already made clear they are finally abandoning the party’s long-standing commitment to get net migration down below 100,000 a year – a target they have never met.

Security minister Brandon Lewis refused to name a new figure, but told Sky News’ Sophy Ridge on Sunday immigration would definitely “come down” – just not to an “arbitrary target”.

Explaining the plan, he said: “Anybody who’s already here and is part of the EU settled status scheme, their rights are protected, they are absolutely clearly protected and in place.

“This will be for new people coming from the EU once we’ve left the European Union under a future immigration system.”
The Conservatives said the new measures would save around £800m a year by 2024-2025.

Carolyn Fairbairn, head of the Confederation of British Industry (CBI) told Sophy Ridge On Sunday that talk of an immigration system that only includes the brightest and best “is a worry”.

She cautioned there needs to be immigration “at all skill levels”.

John Ashworth, the shadow health secretary, dismissed the idea, telling Sophy Ridge On Sunday: “Every single general election the Tory immigration minister gets wheeled out to say this.

“Have they ever delivered it? Have they heck. I mean, do you believe him? I don’t.”
But he refused to say whether he wanted immigration to go up or down after Brexit.

It comes following a debate within Labour as to its own immigration policy, with some senior figures in favour of freedom of movement and others wanting to curb it.

But following six hours of talks in London on Saturday, Jeremy Corbyn said there was “unanimous agreement” between his shadow cabinet and key union backers on the party manifesto.
Labour Party chairman Ian Lavery told Sky News that discussions were “very amicable” with “very little disagreement at all”.
Labour would not comment on reports about the contents of the manifesto, but Sky News’ deputy political editor Sam Coates and political correspondent Tom Rayner have been told by sources that Labour have shelved their conference resolution to maintain free movement and will instead renegotiate migration policy with the EU if Britain votes to leave in a second referendum.
Mr Corbyn described the Labour manifesto – expected to be launched on Thursday – as a “transformative document that will change the lives of the people of this country for the better”.
Asked on the BBC’s Andrew Marr Show whether free movement would continue, he said confirmation would come when the party’s manifesto is launched next week but added “there will be a great deal of movement”.
Among the policies set to be included are free dental checks for everyone in England, with the party having announced plans to roll back the band one fees introduced in 1951 on Saturday.
Meanwhile, Mr Johnson has said that every Tory candidate standing in the general election has agreed to back his Brexit deal in the next parliament.

The prime minister has been repeatedly frustrated in the Commons in trying to get his agreement approved, but said people can be “100%” certain it will get through if they vote for a Conservative majority on 12 December.

He told The Sunday Telegraph that all 635 party candidates were committed to the deal he has struck with Brussels and promised that his government would “unblock” parliament and deliver Brexit.

Mr Johnson needs 326 Tory candidates to be elected next month to secure a majority, which he said was the only way voters could be sure that the 2016 referendum result would be delivered.

The prime minister added: “I am offering a pact with the people: if you vote Conservative you can be 100% sure a majority Conservative government will unblock parliament and get Brexit done.”
Last month, Mr Johnson – who is facing fresh claims about the extent of his controversial relationship with US businesswoman Jennifer Arcuri – saw his Withdrawal Agreement Bill approved in principle by MPs.

They voted for it by 329 votes to 299, but joy for the prime minister was short-lived as parliament then rejected the speedy timetable he had set out by 322 votes to 308.

The second vote effectively put paid to his promise to take the UK out of the EU by Halloween – “no ifs, no buts”.
He had also declared that he would “rather be dead in a ditch” than ask Brussels for an extension, but ended up doing just that and had the Brexit date pushed back to 31 January.