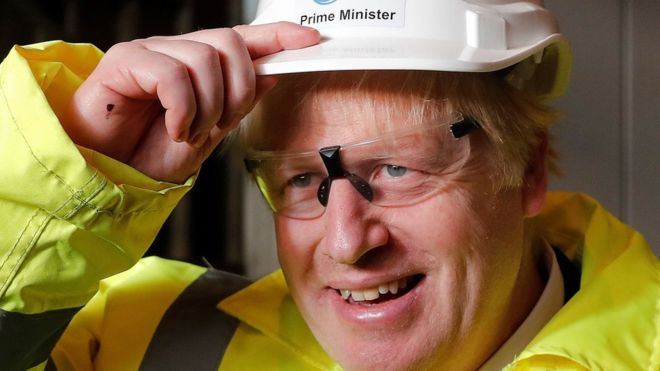 Boris Johnson aims to change National Insurance rules so workers will not have to pay it until they earn £12,500.

The Tory leader earlier said his party would put up the threshold to ensure “low tax for working people” if it wins the general election.

But he later confirmed to the BBC it would be raised to £9,500 in the first budget of a Tory government, with no timetable for the additional £3,000.

Mr Johnson had promised to raise the threshold to £12,500 during the Tory leadership contest.

He told the BBC this was now an “ambition” of his government and a timeframe would be announcement at their first budget if they are elected.

But the PM said bringing in the £9,500 threshold sooner would “help with the cost of living” and “put £500 in the pocket of everybody” – although a later press release claimed the saving would be around £100 per person.

Both figures are still higher than the estimate of the Institute for Fiscal Studies, who said the threshold would save workers about £85 per year and cost the government £2bn.

An earlier estimate by the independent economic think tank said a rise to £12,500 – which would match the threshold where workers start paying income tax – would save workers up to £465 a year, and cost the government £11bn.

But Xiaowei Xu, a research economist with the IFS, said without knowing the proposed timescale of the increase “we do not know how big a policy this is”.

On a visit to an engineering plant in Teesside, Mr Johnson was asked by one of the workers whether his pledges for low tax were “for people like you… or people like us”.

He later had to correct the figures in an interview with the BBC, revising it to a £9,500 threshold next year, with an eventual goal of £12,500.

Mr Johnson said: “We want to operate in a prudent way, but we do want to help now with the cost of living while simultaneously having the funds we need to invest into the NHS, police officers and education as well.”

“Even after 10 years of cruel cuts and despite creaking public services, the Tories still think the answer to the challenges of our time is a tax cut of £1.64 a week, with those on Universal Credit getting about 60p,” he said.

“Meanwhile independent experts have said this will cost up to £11bn, so everyone who relies on public services and social security will be wondering whether they will be paying the price.”

The SNP’s Drew Hendry also attacked the policy, saying if the Conservatives “really wanted to help people on low incomes” then they would “fix and stop the rollout” of Universal Credit.

He said raising the threshold would benefit the “better-off first, and even more than those people on low incomes”.

The IFS also said that a rise in the threshold was “an extremely blunt instrument” if the intention was to help lower paid workers.

“Less than 10% of the total gains from raising [National Insurance contributions] thresholds accrue to the poorest fifth of working households,” they said.

“The government could target low-earning families much more effectively by raising in-work benefits, which would deliver far higher benefits to the lowest-paid for a fraction of the cost”.

What is National Insurance?

National Insurance is a tax paid by workers and the self-employed who are over 16, with the amount varying depending on how much you earn.

Employers do make some contributions on behalf of their workers, but it again depends on how much they are paid.

For employees, it is taken straight out of your salary before you receive it, while self-employed people need to pay as part of their self-assessment.

By paying the tax, you are entitled to a number of benefits, such as a state pension, Jobseeker’s Allowance and maternity pay.

The contributions cover these benefits, with some also going towards the NHS.

Where do the other parties stand on National Insurance?

The Liberal Democrats announced in their manifesto earlier that they plan to review the tax and National Insurance status of employees, dependent contractors and freelancers “to ensure fair and comparable treatment” and to “modernise rights to make them fit for the age of the gig economy”.

The Green Party also pledged in their manifesto – launched earlier this week – that they wanted to merge employees’ National Insurance, capital gains tax, inheritance tax, dividend tax and income tax into a single consolidated income tax, claiming it would “close loopholes” and bring in an additional £20bn to the public purse.

Labour has yet to publish its manifesto, but in an announcement about its plans for the “Living Wage” earlier this month, the party pledged not to raise income tax or National Insurance contributions for the bottom 95% of earners.

The SNP says on its website it would oppose any increases in National Insurance.

Plaid Cymru are calling for an increase to National Insurance contributions for higher rate and additional rate taxpayers, while offering special exemptions for employers in rural and industrial areas with high unemployment.