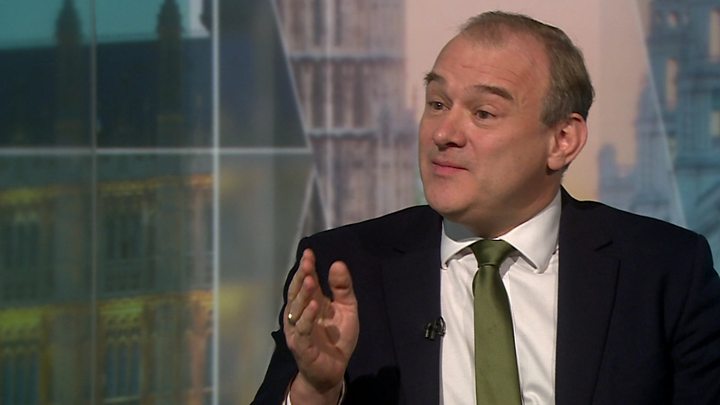 The Lib Dems’ deputy leader says the party can stop Boris Johnson from winning the general election “and through that we can stop Brexit”.

Sir Ed Davey told the BBC the most likely outcome on 12 December was a “minority Tory government”.

He suggested the Lib Dems would support them, along with other parties, if they agreed to another EU referendum.

The party launched its election manifesto earlier with a pledge to stop Brexit which they say would save £50bn.

If the party wins the general election outright, it says it would revoke Article 50, halting Brexit and keeping the UK in the European Union.

If it does not win, it will continue campaigning for another EU referendum, or “People’s Vote”.

Sir Ed told the BBC’s Andrew Neil Show the party wants to stop the Conservatives getting a majority at the election and then use whatever leverage they have to push for another referendum.

“The most likely result I think, looking at the figures, is probably a minority Tory government,” said Sir Ed.

He added: “We can stop Boris Johnson getting a majority and through that we can stop Brexit.”

Sources inside the party concede now that after the withdrawal of the Brexit Party in Conservative seats, what might have been a wildly unpredictable four-way race, has moved to a scrappy national two-way – with the SNP separately dominant in Scotland, and the third smaller UK-wide party eagerly trying to nibble at the margins to get in.

With Labour yet to make any big breakthrough in the campaign, the Lib Dems claim they are the ones who can nab seats from the Conservatives.

So Lib Dem votes in marginal seats are the ones that could prevent Johnson from a clear run at five years in office.

The party’s private hopes a few weeks ago of a massive increase in the number of seats has slipped a lot.

Lib Dem leader Jo Swinson has repeatedly insisted that she is aiming to be the prime minister of a Liberal Democrat government after 12 December’s election – but she admitted in a BBC interview that it would be a “big step”, given the current opinion polls.

She told the BBC’s political editor Laura Kuenssberg her MPs would not actively support a Labour or Tory programme of government as she believes neither Jeremy Corbyn nor Boris Johnson are fit to be prime minister.

But she did not rule out allowing either of them to take office – by abstaining in a vote on their first Queen’s Speech – if they agreed to hold another EU referendum.

She also suggested there could be a “government of national unity” – made up of senior figures from different parties – if there was no overall winner at the polls.

“It’s certainly something which I put forward and suggested a few months ago, it wasn’t something which there was a majority for, ultimately, in the previous Parliament, but we don’t know what the arithmetic of the next Parliament will look like.

“And I just don’t think that we should be sort of trapped by convention into thinking our politics has to go down the tramlines that we’ve assumed it would in the past because this is a time of change in politics.”

She said people needed to be “more imaginative about what happens” after an election, suggesting that there were MPs in other parties that the Lib Dems could work with.

At her party’s manifesto launch, Ms Swinson said the economic boost the UK would get from staying in the EU was at the heart of her plan to build a “brighter future for people”.

The so-called £50bn “Remain bonus” would pay for 20,000 new teachers, extra cash for schools and support for the low-paid.

She said the UK “deserved better” than Boris Johnson or Jeremy Corbyn in Number 10.

The largest single spending commitment in the Lib Dems’ 96-page manifesto, launched at an event in north London, is a major expansion of free childcare, to be paid for by an increase in corporation tax and changes to capital gains allowances on the sale of assets.

There are also eye-catching pledges to freeze the cost of many rail fares for five years, to legalise and tax cannabis sales to over-18s and to charge those taking frequent international flights more.

The Lib Dems are hoping to significantly boost their presence in Parliament on the back of their opposition to Brexit, as they target pro-Remain seats in the south of England and London held by the Conservatives and Labour.

Speaking at her manifesto launch, she accused Boris Johnson of “lying” when he said a Tory victory on 12 December would “get Brexit done”.

What lay ahead instead, she said, were “years and years of endless trade negotiations” with the EU and “more time and energy wasted in getting something we know will not be as good as what we have now”.