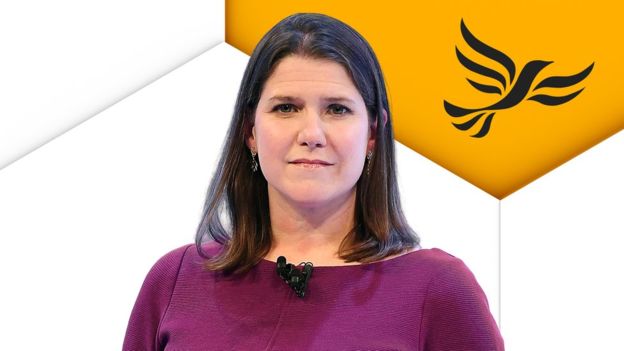 Brexit is a “national embarrassment” and stopping it will free up £50bn to spend on public services, Lib Dem leader Jo Swinson has told the BBC.

The economic boost the party says the UK will get from staying in the EU is at the heart of its manifesto plan to build a “brighter future for people”.

The so-called “Remain bonus” would pay for 20,000 new teachers, extra cash for schools and support for the low-paid.

Other proposals include a “frequent flyer” levy and 80% renewables target.

The largest single spending commitment in the 96-page document is a major expansion of free childcare, to be paid for by an increase in corporation tax and changes to capital gains allowances on the sale of assets.

There are also eye-catching pledges to freeze the cost of many rail fares for five years and to legalise and tax cannabis sales to over-18s.

The Lib Dems are hoping to significantly boost their presence in Parliament on the back of their opposition to Brexit, as they target pro-Remain seats in the south of England and London held by the Conservatives and Labour.

Speaking to the BBC’s political editor Laura Kuenssberg, Ms Swinson acknowledged her party was being squeezed in the opinion polls and it would be a “big step” for them to win the most seats on 12 December.

If the Lib Dems – which had 20 MPs at the end of the last Parliament – win a majority, they will cancel Brexit entirely by revoking the Article 50 process for leaving the EU. If not, they have said they will push for another referendum.

Ms Swinson insisted her party would not actively help either the Tory or Labour leaders into power as neither offered a “route” to stopping Brexit. But she refused to say whether she would actually block them from taking office and would not rule out talking to other parties about forming a government of national unity if no single party won a majority.

“We should not be trapped by convention to think politics should go down the tramlines that we have assumed it would in the past because this is a time of huge change in politics.”

The party says the UK will reap a massive economic dividend from staying in the EU, claiming the economy will be 1.9% larger by 2024-5 than it would otherwise be if the UK leaves on the basis of Boris Johnson’s withdrawal agreement.

Maintaining the UK’s membership would boost economic growth and generate £50bn in total additional tax receipts over the next five years.

The forecast, which the party says is conservative, takes into account savings from the UK not paying the £39bn “divorce bill” and also the cost of continued UK budget payments to the EU.

Education will be the main beneficiary, with £10.5bn earmarked for teacher recruitment and increased money for schools in England. Per-pupil funding will be returned to 2015 levels, the last year the Lib Dems were in government with the Conservatives.

More on the Liberal Democrat manifesto

The “Remain bonus” will also be used to fund changes to benefits designed to tackle in-work poverty. Cuts to work allowances for families on Universal Credit will be reversed while there will be additional support for families with two earners.

Ms Swinson said any form of Brexit would damage the UK’s economic prospects and “starve” the public services of investment.

“Labour and the Conservatives can’t offer the country a brighter future because they both want Brexit. We know that will be bad for our economy, bad for our NHS and bad for our environment.

“Liberal Democrats will stop Brexit and invest in our mental health services, give free childcare to working parents, put 20,000 more teachers into classrooms and take ambitious action to tackle the climate emergency.”

What is in the Lib Dem manifesto?

The Lib Dems say their manifesto is fully costed and other spending commitments will be paid for by tax rises.

They are proposing to raise income tax rates by 1% to pay for an extra £7bn a year for NHS and social care services.

Air Passenger Duty will be reformed, with those taking frequent international flights likely to have to pay more. The proceeds will be used to boost green transport, including slashing VAT rates on electric cars to 5%.

There will also be a levy on the sale of cannabis to over-18s, with the money raised going to fund community policing and youth services. The Lib Dems have long called for the legalisation and taxation of cannabis, a move opposed by the Conservatives and Labour.

In 96 pages of promises, one topic dominates: Brexit.

A few pages in, there is a full page picture of Jo Swinson, as she seeks to contrast herself with what she calls “the two tired old parties” – the Conservatives and Labour -“reusing ideas from the past, whether the 1870s or the 1970s”.

The Lib Dems argue they would have extra tax revenue to spend because forecasts suggest remaining in the EU would lead to higher economic growth. The party also wants to ensure overall national debt continues to decline as a share of national income; a promise that could prove crucial if the party holds the balance of power in the next parliament.

What do the other parties say on Brexit, schools and renewable energy?

The Conservatives say they will deliver Brexit by the end of January 2020 under the terms of the PM’s deal negotiated with the EU.

Labour wants to renegotiate the PM’s Brexit deal then put it to a referendum within six months, with the option of staying in the EU. The party has not said which side it would take in such a vote.

The SNP wants Scotland to stay in the EU. The Brexit Party wants the UK to leave immediately without an exit deal, but negotiate a free trade agreement with the EU.

Labour has not specified its schools budget yet but is pledging to reduce class sizes to under 30 for all five, six, and seven-year-olds.

The Greens, which published their manifesto on Monday, have pledged that wind should provide 70% of the UK’s electricity by 2030, with other renewable energy sources providing “much of the remainder”. Labour has already pledged to build 37 new offshore wind farms in which the government would have a majority stake.