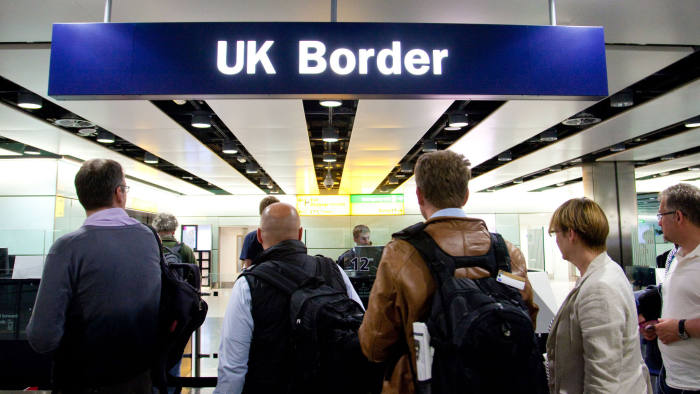 The Conservatives are publishing plans to improve the UK’s border security after Brexit.

If the party wins the general election, it says it will introduce automated exit and entrance checks.

It would also make it harder for people with serious criminal convictions to enter the UK from EU countries.

Labour says the UK would no longer have access to EU databases or the European Arrest Warrant, undermining the fight against terror and organised crime.

The Liberal Democrats say the Conservative plans would lead to “bureaucracy, more red tape and – because the EU will implement a mirrored system for the British public – fees for anyone travelling to the EU for their holiday”.

Announcing the proposals, Home Secretary Priti Patel said: “When people voted to leave in 2016, they were voting to take back control of our borders.

“After Brexit we will introduce an Australian-style points based immigration system and take steps to strengthen our border and improve the security of the UK.”

The party says introducing automated entry and exit checks and a requirement for biometric passports will enable the government to “know who and how many people are in the country, and to identify individuals who have breached the terms of their visa and restrict illegal immigration”.

Successive UK governments have attempted to introduce a more reliable system for counting people in and out of the country, with limited success.

The Conservatives say they would also introduce an American-style visa waiver scheme, called Electronic Travel Authorisation (ETA), which travellers would have to obtain before reaching the UK border.

It would provide an enhanced ability to screen arrivals against watchlists and block those deemed to be a threat from entering the UK, the party claims.

As the technology becomes available, a future Conservative government would hope to record biometric data – which might include things like fingerprints or retina scans – on all ETAs to provide a further security layer, although the party does not go into details.

In last year’s White Paper setting out its post-Brexit immigration plans, the government said: “It is our intention to require EU citizens to obtain an ETA, but we intend to discuss this further with the EU in the next phase of negotiations.”

Minor criminality will not be a bar to entry in itself, just as is the case with people from non-EU countries at the moment, but would be assessed on a “case by case” basis.

The Conservatives say they would also end the use of European ID cards as proof of identity for travel at the UK border.

The plans also include more checks on goods entering the UK from the EU using “pre-arrival data”, which the Tories say would cut revenue “leakage” caused by smuggling by £5bn.

The details of how this would work will be hammered out in trade talks with the EU and the rest of the world, the party says.

The BBC’s Reality Check team said the £5bn figure was composed of a number of different sources, including £1.5bn of VAT fraud and error in online marketplaces.

There is also a tension between gathering data and keeping trade flowing smoothly without burdening business with red tape.

Shadow home secretary Diane Abbott said: “Tory claims to be strengthening the border through their sell-out Brexit deal are groundless.”

“By quitting the entire system of EU security and justice, we will no longer have real-time access to a host of critical databases or access to the European Arrest Warrant,” she said.

“This will undermine the ability of our police and border agencies to apprehend terrorists and organised criminals, and could even make us a safe haven for fugitives fleeing the justice systems in the EU.”