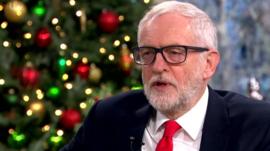 Jeremy Corbyn has apologised again for incidents of anti-Semitism in Labour.

The party leader said sorry twice in 2018, but was criticised for refusing to do so four times in a recent interview with the BBC’s Andrew Neil.

Asked repeatedly on ITV’s This Morning by Phillip Schofield to apologise, Mr Corbyn said: “Obviously I am very sorry for everything that has happened.”

Labour has been dealing with the row over the extent of anti-Semitism within the party for more than three years.

It was reignited during the election campaign after the Chief Rabbi, Ephraim Mirvis, claimed “a new poison – sanctioned from the very top – had taken root” in Labour.

In response, Mr Corbyn said anti-Jewish racism was “vile and wrong” and would not be tolerated in any form under a future Labour government.

He said internal processes for dealing with anti-Semitism cases were “constantly under review” and his door would be open to Rabbi Mirvis and other faith leaders to discuss their concerns if he entered Downing Street..

In the interview on the mid-morning programme, Schofield said: “Here is your opportunity now to apologise to the Jewish community for any anti-Semitism by Labour members”.

Mr Corbyn began to answer, saying, “can I make it clear…”, but was interrupted by the presenter who said, “no, just say sorry”.

The Labour leader replied: “Our party and me do not accept anti-Semitism in any form. Obviously I am very sorry for everything that has happened, but I want to make this clear – I am dealing with it, I have dealt with it.

“Other parties are also affected by anti-Semitism. Candidates have been withdrawn by the Liberal Democrats, the Conservatives, and by us, because of it. We just do not accept it in any form whatsoever.”