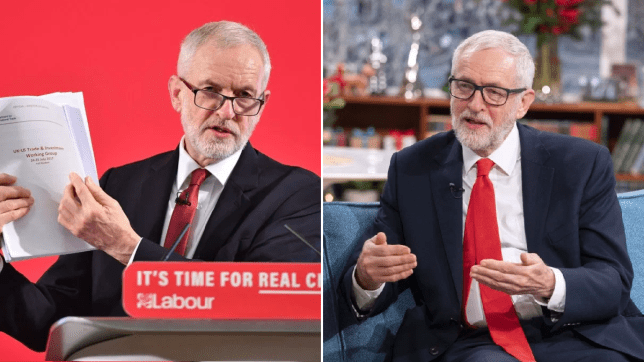 The leak of documents which Labour claim show the NHS is on the table in trade talks with the US resembles a former Russian disinformation campaign, experts have said.

Last week, Jeremy Corbyn brandished the documents at a press conference and claimed they showed that officials in the UK had spoken to counterparts in the US about a post-Brexit trade deal involving the NHS.

Now experts from think tank Atlantic Council and social media analytics firm Graphika as well as researchers from Oxford and Cardiff universities have suggested the way the documents were shared is similar to a Russian disinformation campaign called Secondary Infektion.

Secondary Infektion, which was uncovered by Atlantic Council last year, used fabricated or altered documents to try to spread false narratives across at least 30 online platforms.

It stemmed from a network of social media accounts which Facebook said originated in Russia.

Asked about allegations that Russian hackers were involved in the leak, the Kremlin said such claims are usually made to distract from domestic problems. Spokesman Dmitry Peskov said it was very easy to demonise Russian hackers.

The papers cited by Mr Corbyn first appeared on Reddit in October.

Ben Nimmo, head of investigations at Graphika, said: “It’s on the same set of websites (as Secondary Infektion), it’s using the same types of accounts and making the same language errors.

“It’s either the Russian operation or someone trying hard to look like it.”

Mr Nimmo said some of the language errors on the account on Reddit where the papers were shared were typical of non-native English speakers. The errors included phrases like “why I am not surprised?” or “standing on her knees”.

Graham Brookie, director of the Atlantic Council’s Digital Forensic Research Lab, said: “Whoever did this … was absolutely trying to keep it a secret.

“It carries the spectre of foreign influence.”

Mr Corbyn said: “This is such nonsense, such utter nonsense. This is desperation by the Conservative Party.

“These documents represent secret talks between the Tory Government and the American administration to sell off our public services to American corporations. Not even the Government has claimed they are false documents, they have challenged our analysis of them, they’ve challenged what we think they are trying to do on them but they haven’t challenged the honesty of them.

“So I think this is just such nonsense.”

Labour’s Laura Pidcock was challenged about the origin of the papers by Sky News’ Kay Burley.

She said: “It’s interesting that people are trying to distract from the content of those documents – very very worrying.

“Most people on the doorsteps are asking about the future of the NHS and it is only the Labour Party who are saying it will not be privatised, put into the hands of huge corporations and we will end the system of privatisation.

“People can indulge on where these came from or try to distract people but the crucial and fundamental point is what is the content of this? How secure is our NHS?

“With the Conservatives is absolutely is not secure. Neither of those parties has said the content isn’t right – I think this is a distraction.”

She added that she was “not privy” to information about where they had come from.

It comes as Russian President Vladimir Putin has signed a bill into law that gives his government the right to register bloggers, journalists and social media users as foreign agents.

It is an extension of an existing law involving foreign-funded media outlets, which came into place after the US labelled the Russian state-funded RT as a foreign agent.

The law, which can apply to anyone who distributes content produced by media outlets and receives payments from abroad, has been criticised by many in Russia for restriction freedom of expression further.

Lisa-Maria Neudert a researcher at Oxford University’s Project on Computational Propaganda, said that if Russia was behind a leak, it may not have intended to help a particular side.

She said: “We know from the Russian playbook that often it is not for or against anything. It’s about sowing confusion, and destroying the field of political trust.”

Analysis of the documents by Sky News correspondents found the concerns from the opposition party may have been exaggerated as there was little mention of the health service.

The Conservative Party has insisted it would not put the NHS “up for sale” in future trade talks.