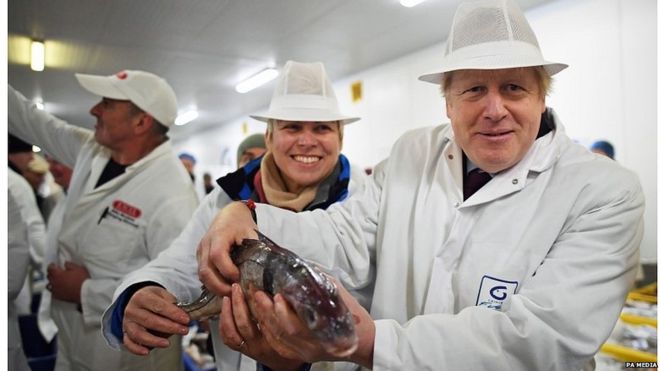 In a speech in Sunderland – 61% of which voted to Leave – the PM told voters: “The Labour Party has let you down.”

He attacked Parliament, saying it had “delayed” and “denied” Brexit.

Mr Johnson will also travel to south-west England, where he will warn against voting for the pro-EU Lib Dems.

At the event in Sunderland, Mr Johnson took questions from the public and the press.

Mr Johnson spoke of his “oven-ready” Brexit deal with the EU, saying the alternative to voting for the Conservatives was “yet more delay” and “division and deadlock”.

He criticised Labour leader Jeremy Corbyn, arguing he did not have a credible Brexit plan, adding that every Conservative election candidate had pledged to support his own withdrawal deal with the EU.

Mr Johnson also challenged Labour shadow chancellor John McDonnell’s plans, which he said “will put up taxes” and be a “recipe for disaster”.

Meanwhile, Mr McDonnell promised to deliver a budget to “end austerity” within its first 100 days if the party wins Thursday’s election.

In a speech in London setting out his priorities, he also pledged to get “money moving out of Whitehall and the City”.

The Conservative Party says the prime minister is intending to “visit every region in England and Wales” in the final three days of the election campaign, with a message that a vote for his party is a vote to “get Brexit done and unleash Britain’s potential”.

Mr Johnson started the day at a fish market in Grimsby, one of a number of longstanding Labour areas that voted heavily to leave the EU in the 2016 referendum that both the Conservatives and the Brexit Party are targeting.

On his visit to Sunderland, Mr Johnson said it had been 1,264 days since the city voted to leave the EU. “People voted to get out of the European Union – our democratic duty to do so.

“Our economy is suffering right now because of the uncertainty” created by the Brexit delay, he said.

Mr Johnson has repeatedly warned that the only alternative to a Conservative majority is a hung Parliament, with Mr Corbyn and SNP leader Nicola Sturgeon forming a coalition and resulting in further referendums on Brexit and Scottish independence.

Ms Sturgeon has said she is confident an agreement on a second independence vote could be done if Labour needed SNP support to form a government if there is a hung parliament.

The Liberal Democrats are, meanwhile, pledging to table legislation to stop Brexit immediately after the election by introducing two draft bills they say would pave the way for another EU referendum.

The first would enable the Electoral Commission to start the necessary consultation around a referendum question and lead campaign designation – and the second would provide a referendum on the government’s Brexit deal versus remaining in the EU.

Lib Dem leader Jo Swinson told Radio 4’s Today programme the “most likely way” to stop Brexit was through another vote as the possibility of her party winning power on its own and revoking Article 50 looked increasingly remote.