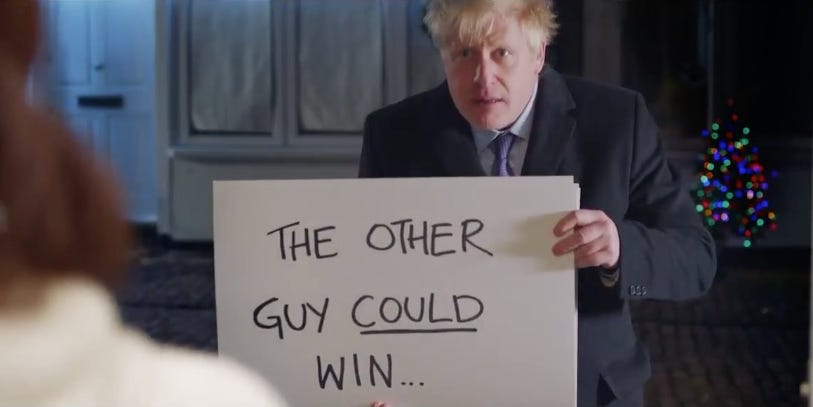 With just two days to go until the election, Boris Johnson and Jeremy Corbyn have tried to sway voters by starring in pop culture-inspired videos.

Mr Johnson posted a video on Monday evening where he emulates the famous Love Actually scene in which Andrew Lincoln silently holds up placards to Keira Knightley as he pretends to be a group of carol singers.

At the same time, Mr Corbyn posted a video entitled “Mean Tweets with Jeremy Corbyn”, in which the Labour leader read out critical tweets about himself, in the same style as US late-night chat host Jimmy Kimmel.

The prime minister’s three-minute “Brexit, actually” clip features him showing up at the door of an apathetic voter and sliently showing her a series of Brexit-themed messages after pretending to be a group of carol singers.

Two of the placards read: “With any luck, by next year we’ll have Brexit done (if parliament doesn’t block it again).”

Others said: “Your vote has never been more important, the other guy could win, so you have a choice to make between a working majority or another gridlocked hung parliament.”

At the end of the spoof clip, Mr Johnson says “enough, let’s get this done” – a reference to what Lincoln’s character says as he walks away from the house.

Less than half an hour after the Conservatives’ campaign video had been launched, Dr Allin-Khan tweeted to say the prime minister had copied her spoof.

She wrote: “I won’t be retweeting it – but Boris Johnson has copied my #ElectionActually video. Tanks. On. The. Lawn.”

In Mr Corbyn’s spoof video, the Labour leader sat by a fireplace and read out critical tweets about himself and his campaign.

Mr Corbyn replied: “What is a commie hat? I wear a cap! It’s a bit like when I was told I was riding a Maoist bicycle. It’s a bicycle!”

After addressing Labour manifesto promises on broadband and tuition fees, he read out a tweet about being found sexy.

“Oh this is bad,” Mr Corbyn said, later telling viewers there was a magic money tree “in the Cayman Islands”.

The Labour leader ended the video with a high-five to someone off-camera and saying he would be the next prime minister.