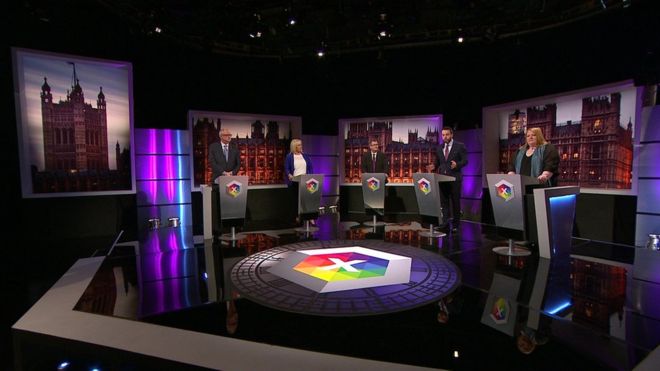 The five main Stormont parties have discussed Brexit, healthcare and the collapse of the assembly in the BBC election debate.

It took place in the BBC’s studios in Belfast on Tuesday night.

The general election takes place on Thursday with 18 Westminster seats in Northern Ireland at stake.

Four of the Stormont leaders attended the debate, while the Democratic Unionist Party (DUP) was represented by Sir Jeffrey Donaldson.

On Brexit, there was little meeting of minds between the parties.

She said that she believed that Irish interests are never going to be served in Westminster and “one or two Irish MPs will never make a difference”.

“I have defended the Good Friday Agreement, the all island economy and made sure there was no hard border on this island because we used our influence where it mattered,” she said.

SDLP leader Colum Eastwood argued that Sinn Féin want to “stand outside looking in the window”.

The DUP’s Sir Jeffrey Donaldson said there has been poor negotiation on behalf of the UK government. He said Mr Johnson’s deal was and is “flawed”.

“That’s why we used our 10 votes in the House of Commons to block the deal. The DUP was absolutely crucial when it came to Brexit,” he said.

The issue of the health service and climate change was also raised during the hour-long debate, as was the absence of Stormont.

January 2020 will mark three years since the assembly collapsed, after a bitter row between the parties over a green energy financial scandal.

Alliance Party leader Naomi Long said she wanted decisions being taken by local ministers and warned that the 13 January was the deadline to see devolution restored.

“I believe that local politicians are the best people to take those decisions,” she said.