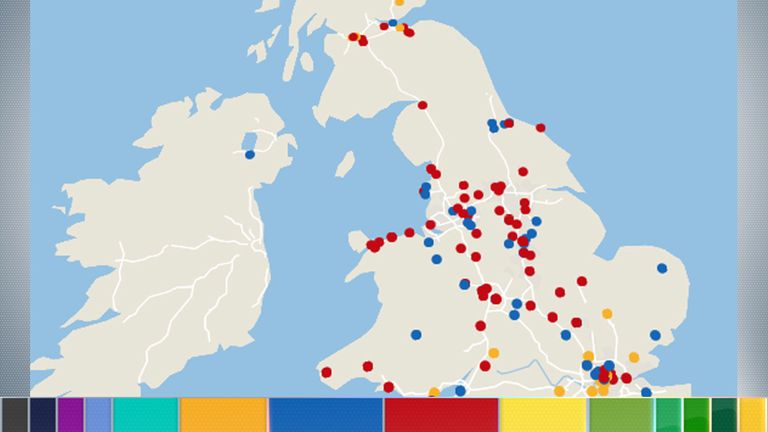 More than 100 towns and cities have received a visit from a party leader during the general election campaign, Sky News analysis shows.

It reveals how the parties have prioritised their campaigning, with Labour looking to maintain the so-called red wall, the heartland seats in the North West which are traditional strongholds.

Mr Corbyn has also travelled to South Wales, keen to maintain the ex-mining towns and regions which have lent his party support for decades.

It’s the Conservatives who win the accolade, from Sky’s data, for the trip furthest north, making it to Elgin in Scotland, north of Aberdeen.

The Lib Dems have a more scattered appearance on our map. They have been hopeful of picking up seats in London and the South West, so much of their campaigning is in this area.

But with their leader Jo Swinson fighting to hold East Dunbartonshire, she’s made an important trip over the border too in Scotland.

The Labour and Conservative crossover points show how Brexit has changed this election.

While the Conservatives may never have hoped of scooping some seats in the North, this time they can move closer, picking up key votes from people who value Brexit over a party loyalty.

Mr Johnson is also the only party leader who has been to Northern Ireland. He made a quick stop there on the first full day of campaigning, way back on 6 November, popping over to Craigavon in County Armagh.

With the differences in political parties there, it is unlikely any other party would consider it a target region.

Westminster and London is a highly visited region, which is to be expected, and should be assessed with caution.

Far more interesting is those towns and cities which have received visits from all party leaders, or multiple stops from one, showing where leaders might be hopeful of tipping the balance in a marginal.

Mr Corbyn, Mr Johnson and Ms Swinson have all visited Southampton. The area has three constituencies – one, Southampton Itchen, is held by the Conservatives – but only just.

Royston Smith won it with a majority of just 31 back in 2017, meaning the seat is a key target for Labour.

Some places have been visited more than once by the same leader.

Mr Corbyn has been in Glasgow three times, Birmingham and Ashfield twice each, Ms Swinson has visited St Albans and Cardiff twice, and Mr Johnson has been in Stockton-on-Tees on two occasions.

One of the prime minister’s most active days was 27 November, when he visited Penzance, Helston, Callestick and Redruth in the South West.

On 14 November he was in Dundee, Newtongrange, Linlithgow and Edinburgh in Scotland.

Then, on 5 December, he visited Peterborough in Cambridgeshire, Rugby in Warwickshire, as well as Walsall and Birmingham in the West Midlands.

Unsurprisingly, the party leaders ramped up campaign stops as they got closer to polling day.

Having tended to make one to two stops a day, Ms Swinson made three on 11 December, going to Wimbledon, Esher and Guildford across Surrey and South West London.

Campaigning was suspended on 29 November after a terror attack in London, making this one of the quietest days.

Mr Johnson has made a total of 62 visits, beaten by Mr Corbyn who made 86. Ms Swinson made 38 visits across the campaign period.