Have you seen him? His family are very worried since he’s been missing since the 27th of April 2019.

Once again we are in Spain searching around for Mark. We arrived on the 20th December with maps and other equipment to do searches around Ontinyent. We also set out a rough itinerary of where and what we are going to do so we did not waste any time. One of our first visits was to the Xativa police department to see if anything had changed within the investigation as my impression was not a lot was getting done. I must admit sitting down with the police chief and asking questions was very reassuring that they had and are doing their best. We saw various papers pertaining to the investigation and I for one came away with the knowledge that they are doing their best despite turning up nothing new. We decided to visit the train stations from Ontinyent to Alicante but only picked 9 out of the 19 that are along the way, the main ones that is. Started at Alicante train terminal cos we had car hire trouble, very sluggish and thus swapped it for a better one as the car hire place is near Alicante airport after that we was up to the train terminal. Asked all round the train station and two people said they had seen Mark around the football stadium and goes for a shower every morning at 8am at a homeless centre, a little bit flabbergasted at what we heard but we’ve been down this road before. The stadium sits on a hill and within the grounds of lots of greenery and parks. Lots of homeless people live there. We had a good look around and checked homeless places even dropping off posters of Mark to them and in to the Red Cross. We then visited the homeless centre and the chaps said no, they had not seen anyone of that name or description. You cannot get a shower without documents, so unfortunately that was not a goer. Not the end cos he could of obtained some documents or may be Mark had some on him if it is Mark that is. Monday we re-visited the homeless in Alicante and dropped more posters off after that we then drove up to Alicante airport and had a look around. Dropped off some posters to the police within the airport and to my surprise some homeless do reside in the terminal and we saw some evidence of that. Early Tuesday morning I set off to sit and wait outside the homeless just to reassure my own curiosity that it was or was not Mark. Sadly nothing, another dead end and I am not afraid to say in tears on my way home. Irrespective  of my feelings the homeless appear to be looked after if that is the correct phrase. Showers, sleeping areas and clothing if you want it and somewhere warm to go. Sad to see so many people homeless in a relatively wealthy country. Time to unwind slightly and enjoy New Years Eve and day if possible. A slight rethink to ensure we’ve covered everything on our itinerary list. Home Friday evening. Possibly our last search, we now need something really significant to get us back but we have not given up hope of finding Mark.

Thank you again to all my Family and Friends who have supported us over the last few months. To the people I don’t even know, thank you. All your kind words have been fantastic.

If you have any information regarding his whereabouts, please contact the authorities or the family directly. The family have created a Facebook Group to keep people updated, you can view it on the following link: Mark Palmer: Missing in Ontinyent, Spain 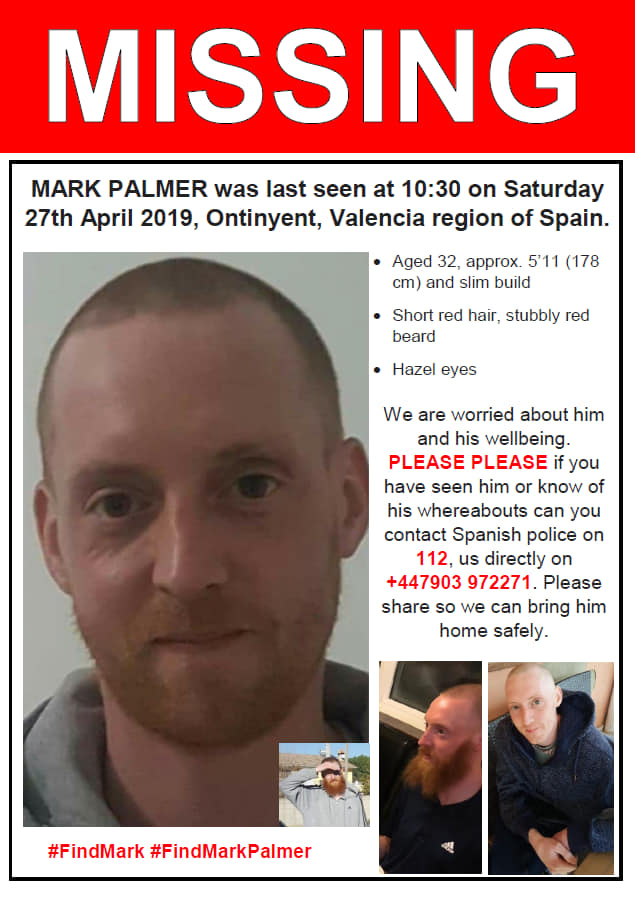