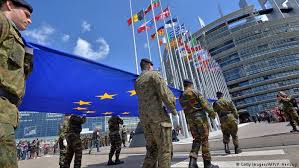 London (Reuters) – Britain has withdrawn its offer to lead a European Union military force next year because of Brexit, the Ministry of Defence said on Tuesday.

Rapid-reaction forces of about 1,500 soldiers, called EU Battlegroups, were formed in 2007 but have never been deployed.

“The European Commission has been clear that a third country cannot be an EU Framework Nation and therefore the UK cannot lead an EU-badged Battlegroup just after we have left the EU,” a government spokesperson said.

The defence ministry added in a statement: “We could not have been any clearer about the UK’s unconditional commitment to European security,”

“As we have said, we are seeking a deep and special partnership in this area and see no reason why it could not already be effective from 2019.”

The timing of the announcement comes as Britain is seeking European help in the wake of what it alleges is Russia’s use of chemical weapons to target a former double agent in the English city of Salisbury earlier this month.