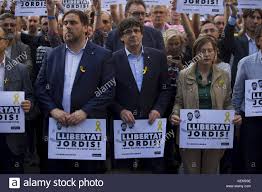 Protests broke out across the Spanish region of Catalonia on Sunday after former leader Carles Puigdemont was taken into custody in Germany.

At least 89 people were injured in clashes with police and four arrests were made.

Mr Puigdemont, who is wanted in Spain for sedition and rebellion, was detained by German police acting on a European arrest warrant.

He will appear before a German judge later on Monday.

Mr Puigdemont was detained while crossing from Denmark on his way to Belgium, where he has been living in self-imposed exile since Catalonia’s parliament unilaterally declared independence from Spain in October.

A European warrant for his arrest was reissued on Friday.

In central Barcelona, protesters chanted “Freedom for the political prisoners” and “This Europe is shameful!” as they headed to the offices of the European Commission and the German consulate.

Spanish news agency Efe estimated crowds of 55,000 in the centre of the city.

Smaller demonstrations were held in Girona, where Mr Puigdemont once served as mayor, Tarragona and Lleida. Some protesters also formed road blocks in various locations.

Tensions in Catalonia are very high and its separatist leaders abandoned plans to name a new president after the arrest on Friday of the latest candidate, Jordi Turull, sparked protests in Barcelona.

Spain’s Supreme Court has ruled 25 that Catalan leaders should be tried for rebellion, embezzlement or disobeying the state. They all deny the allegations.

How was Carles Puigdemont caught?

German police said that Mr Puigdemont was detained by a highway patrol in the northern state of Schleswig-Holstein, which borders Denmark.

He had been on a trip to Finland to meet lawmakers and attend a conference last week when the arrest warrant against him was reissued, taking him by surprise.

He slipped out of Finland before the authorities could arrest him but only got as far as Germany before being intercepted.

His spokesman, Joan Maria Pique, said had been heading to Belgium “to put himself, as always, at the disposal of Belgian justice”.

International warrants for Mr Puigdemont and other Catalan leaders were withdrawn in December by a Spanish judge, who said they had shown a willingness to return to the country.

Mr Puigdemont has spent the night in a prison in the north German town of Neumünster.

His court appearance on Monday will be a formality to confirm his identity. The court will then decide whether he must remain in custody pending extradition proceedings.

He faces charges of sedition, rebellion, and misappropriation of public funds in Spain as a result of his role in last year’s Catalan banned independence referendum. The charges in Spain could result in up to 30 years in prison.

Germany has 60 days to decide whether to return him.

In order to do so, its judges need to assess whether the Spanish charges are punishable under German law.

Criminal lawyer Martin Heger told Germany’s Spiegel website (in German) that the lesser charge of misappropriation of public funds was also a crime under German law, and therefore it was clear that the exiled ex-leader would have to be extradited.

However, if he is extradited on that charge, he can only be tried on that offence.

It is unclear whether the alleged crimes of rebellion and sedition are punishable in Germany.

The extradition procedure can last about two months.

Mt Puigdemont also has the right to oppose the warrant and apply for asylum in Germany.

Spain’s latest move is considered the most serious challenge to date to the Catalan independence movement. Almost the entire leadership now faces a major legal fight.

Various other Catalan politicians have been subjected to new warrants, including Catalonia’s former education minister, Clara Ponsati. She is in Scotland, where she has a position at the University of St Andrews, and is preparing to hand herself in.

The number of European arrest warrants issued has increased since 2005, according to EU figures. In 2015, about 16,000 warrants were issued and about 5,000 executed.

How did we get here?

1 October 2017: The independence referendum takes place in Catalonia; it is deemed illegal by Spain and boycotted by many potential voters

27 October: Catalonia’s leaders declare independence, which leads to the Spanish government imposing direct rule on the region and dissolving its parliament

30 October: Charges of rebellion, sedition and misuse of public funds are brought against various sacked members of the Catalan government, including Mr Puigdemont

3 November: European arrest warrants are issued against Mr Puigdemont and four of his allies, who have all fled to Belgium

1 March 2018: Mr Puigdemont says he is stepping aside and he backs detained activist Jordi Sanchez to run as Catalonia’s president

21 March: Mr Sanchez drops his leadership bid and instead the candidacy is passed to Jordi Turull, who the following day is rejected by hardline separatists

23 March: Mr Turull and various others are arrested in Spain, and the European arrest warrants are reissued