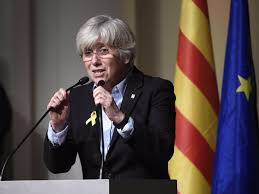 A former Catalan minister wanted by Spain for her role in last year’s independence bid will surrender to police on Wednesday in Scotland where she had fled, her lawyer said.

“I have arranged with Police Scotland for the voluntary attendance of Professor Clara Ponsati at St Leonard’s Police Station, Edinburgh,” Aamer Anwar said in a statement Tuesday.

“My legal team is instructed by Professor Ponsati to robustly defend her against the Spanish attempts to extradite her,” he said, adding that she saw the charges as “political persecution”.

Ponsati will appear in court later on Wednesday for a preliminary extradition hearing where her lawyers will request that she be granted bail pending a full hearing.

Puigdemont was arrested by German police on Sunday.

Spain’s Supreme Court said it would prosecute 13 key separatists including Puigdemont and Ponsati for “rebellion”, a crime which carries a maximum penalty of 30 years in jail.

Ponsati was a minister in the Catalan government when it declared independence from the rest of Spain following a referendum in October.

She fled later that month with Puigdemont and three other former ministers to Brussels, after Spain — which declared the referendum illegal — dismissed the Catalan executive and imposed direct rule.

Ponsati then returned to the University of St Andrews, northeast of Edinburgh, where she had formerly worked, and is a professor in the school of economics and finance.

Ponsati has received support from members of the Scottish National Party, who hold power in the devolved government in Edinburgh and advocate secession from the United Kingdom.

However, Scottish First Minister and SNP leader Nicola Sturgeon made clear on Sunday that politicians “have no powers to intervene” in the extradition process.

“It is well established that the Scottish government supports the right of the people of Catalonia to determine their own future and that we strongly oppose the Spanish government’s decision to seek the arrest and imprisonment of independence-supporting politicians,” she said in a statement.