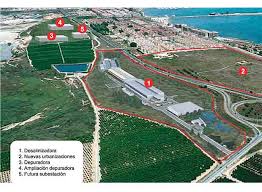 The Minister of Agriculture and Environment, Isabel García Tejerina, has announced that the Torrevieja desalination plant will triple its annual production to guarantee supplies to both the population and to local farmers. The plant that now produces 40 hectometres will increase its output to 120 hectometres thanks to an investment of 45 million euros from central government.

The announcement was made during a visit to the Torrevieja desalination plant by the minister on Monday.

The increases will be carried out in two phases. The first, which will be completed during the summer, will take the output to 80 cubic hectometres this year. However there is currently no date for the additional increase to 120 cubic hectometres, although the minister said that it would be implemented as soon as is practically possible

She said that “when this Government took office, the desalination plant was still unfinished. We finished it, and now we are working to deliver 120 cubic hectometres of capacity per year which nobody thought possible at the time”

She also stressed that the action taken in Torrevieja is just “one of the many that have been made by the current government to ensure the availability of water throughout the Levante region, where investment has now reached approximately 400 million euros.

Among the actions carried out in recent years, she highlighted the emergency works and openings of wells, the improvement of pipelines, connection of desalination plants with users, support for desalinated water and many exemptions from payment for irrigators. She concluded by saying “The irrigators know that without a government that is committed to rural areas, to competitive agriculture, this would have been impossible.”