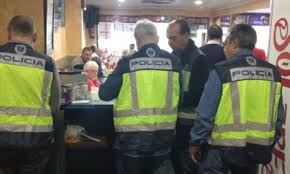 Police have raided a pub packed with Brits in Spain for holding ‘illegal gambling’ games.

In the raid on the Brit-run pub in Benidorm on the Costa Blanca police confiscated €1,447 from the game and another €21,000 from a safe.

Spanish authorities consider bingo to be gambling which requires a permit and the pub had reportedly been given several warnings about illegal gambling in the past.

Officials say the game of bingo is subject to strict legislation and could only be played in places which had the correct licences.