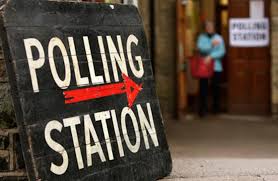 It is the last set of elections before Britain leaves the EU – but will Brexit be a factor at local polls in England on 3 May? We looked at the contest in two very different London boroughs.

“It is weird to say that problems with bins are more important than the number one challenge of a generation. The party must think people are idiots.”

Marx de Morais, pictured above, was once an enthusiastic member of the Conservative Party.

The food designer and writer, who was born in the former East Germany, had been due to stand for the party in Camden, north London, on 3 May, but he says he grew tired of being told to “shut up” about Brexit by local Tory leaders, even when voters asked about it.

“They said don’t talk about it. Just talk about the bins, we don’t care about Brexit,” he says.

“They are completely afraid that they will lose everything in Camden.”

At the other end of the Conservative spectrum – and an hour’s train ride east – Conservative MP Andrew Rosindell says Tory candidates in Havering will have “no qualms” about mentioning Brexit on the doorstep.

Havering is a bit of an anomaly – it’s a London borough but, says Mr Rosindell, it feels like part of Essex and probably has more in common with the Leave supporting towns across that county than Remain-supporting inner-London boroughs like Camden.

“These local elections have nothing to do with Brexit,” says the Romford MP.

But, he argues, it would be perverse to confine the conversation to “grass verges and problems with dog mess on the pavements” when the country is going through such a momentous change of direction.

As an ardent Brexiteer – in an area that voted strongly to Leave the EU – he believes the Conservatives have a compelling message for Leave voters from across the political spectrum, who he says are just keen to “get on with it”.

Bin collections will undoubtedly be the top priority for many of the millions of voters expected to go to the polls across England on 3 May – or council tax rises and cuts to local services.

These are the things that local councillors can actually do something about.

But local polls are also used by voters to send a message to the government of the day.

The last time these council seats were contested, in 2014, UKIP broke through into local government for the first time, taking more than 150 seats from the Conservatives and Labour.

The party also topped the poll in the European elections that were held on the same day.

It was one of a series of shocks to the political establishment – a “political earthquake” to use the former UKIP leader Nigel Farage’s phrase – that convinced David Cameron to hold a referendum.

All of Mr Farage’s dreams came true on 23 June 2016 – but the victory all but finished his party off, as its main reason for existence suddenly evaporated.

It has seen an exodus of members, a string of ill-fated and in the most recent example, scandal-hit, leaders, and has only narrowly avoided bankruptcy.

Interim leader Gerard Batten, who took over from the sacked Henry Bolton last month, says the party is now “back in the black” thanks to “generous donations” from local branches.

But it is still very much in recovery mode.

“I was appalled to find there were no plans in place for local elections. I have been trying to pull things together as best I can over the past few weeks.

“I am now trying to get 740 candidates together so we can get a Party Election Broadcast.”

He adds: “We are doing everything we possibly can to get back in the battle and to give people a chance to vote for a real exit from the EU.”

Keith Darvill, Labour’s Remain-supporting leader in Havering says he is “relieved” that the EU is not playing as big on the doorstep as it did in 2014, despite the best efforts of UKIP candidates in the area, who nearly wiped Labour out last time.

“We don’t really want it to become an EU local election,” he says, and although he will debate the issue with voters if they bring it up – “I am not shy about it, people know my views” – he is focusing his party’s campaign on local issues.

In many parts of the country, particularly Remain-supporting outer London boroughs, the biggest noise about Brexit is likely to be coming from the party that wants to reverse it.

The Lib Dems did not exactly set the world alight at last year’s general election with their call for another EU referendum.

But leader Sir Vince Cable thinks it will be different this time because “it has become much more clear what is at stake”.

The party believe they have a secret weapon that was not available to them at the general election – the votes of EU citizens living in the UK, who are allowed to take part in local elections.

“We are reaching out to them to vote Lib Dem and help us support their rights and ultimately secure an exit from Brexit. Their support could make a vital difference in close council seats,” says Sir Vince.

The party has produced social media ads in 17 European languages, fronted by members of the European Parliament from those countries, encouraging EU citizens to register and vote Lib Dem.

The Green Party is also campaigning to protect the rights of EU citizens living in the UK and is calling for a “people’s poll” on the final Brexit deal to stop the government “marching us towards a national calamity”.

And Labour’s London Mayor, Sadiq Khan, has made a direct appeal to the 1.1 million EU citizens living in London to vote Labour to “punish” Theresa May for Brexit “chaos”.

Labour hopes the support of EU nationals could swing the poll in their favour in key London battlegrounds like Brent, with an estimated 51,000 EU national residents, and Wandsworth, where 39,000 people from other EU countries live.

But the main campaign group for EU nationals living in the UK, the 3million, has said many are still angry with Labour for voting to trigger Article 50 and may be reluctant to support a party that backs Britain’s departure from the EU.

And the recent sacking of frontbencher Owen Smith for saying Labour should campaign to remain in the single market after Brexit and push for a second referendum suggests the party is keen on keeping its Leave-supporting voters on side.

Shadow Brexit Secretary Sir Keir Starmer told The Guardian he was determined not to let Labour “break apart” over Brexit and although he voted Remain and would do so again he did not believe there was a case for a second referendum.

Some Labour members in Camden, where Sir Keir is one of the local MPs and 75% of those that voted in the referendum backed Remain, hold out hopes for a change of heart.

Speaking before Owen Smith’s sacking, he said: “Now we can say on the doorstep the whole of the Labour Party is in favour of remaining in the customs union.

“It is a clear position – it is not a solution to all of the problems – but we are able to go out on the doorstep with an answer to the many people raising the issue, who were saying the Labour Party is not a clear enough alternative to the Tories on Brexit.”

But, he adds, “that is not the position of the Labour Party” and, he argues, it would be a mistake for the party to campaign for a second referendum at this stage, because those who voted Leave, including some of his Labour colleagues in Camden, had legitimate reasons for doing so and should not be treated as if they were “stupid”.

His hope, he says, is that having persuaded Eurosceptic colleagues on the Labour front bench to back a customs union, Sir Keir can now move them to a similar position on the single market.

Mr Pietragnoli, an Italian citizen who has been living in the UK since 2003, argues that Labour’s anti-austerity message is intrinsically linked to Brexit, with many of the jobs in the area, in universities and a French school, connected to Europe, not to mention the “physical link” of the Eurostar terminal at St Pancras.

“It has always been a very open, inclusive and mixed borough,” he adds, sounding not unlike his one-time Tory rival Marx de Morais.

Mr de Morais has now quit the Conservative Party and joined the cross-party Open Britain campaign, which is opposed to Brexit. He says he would have felt “hypocritical” standing for a party that was in favour of a “hard” Brexit in area where so many of his fellow EU nationals – an estimated 19,000 – live and work.

The pro-European leader of Camden Conservatives, Andrew Marshall, quit the party last February in protest at Theresa May’s handling of the Brexit process and has since joined the Lib Dems, although he does not plan to stand on 3 May.

The Conservatives know they are fighting a rearguard action in Camden – they used to run the borough, in coalition with the Lib Dems, but now, they admit privately, their main aim is to prevent it becoming a “one-party-state” like neighbouring, Labour-dominated, Islington.

In the circumstances, there is little mileage in their candidates stirring up debate about Brexit on the doorstep, when they feel they have stronger cards to play.

A Conservative Party spokesman said: “As the prime minister has made clear, EU citizens who have made their lives here have made a huge contribution to our society, we want them to stay and EU citizens living lawfully in the UK today will be able to stay.

“But these local elections aren’t about Brexit. They’re about your council and bin collections, street cleaning, good local school places and how much you pay in council tax.

“It’s Conservative councillors and councils who have a proven record of providing good local services while keeping council tax down.”

Labour is focusing all of its national firepower on cuts to local services, with Jeremy Corbyn urging voters to use the local polls to “send an unmistakeable message to this government that enough is enough”.

“Austerity is a political choice. So when your children’s school is losing teachers and sending begging letters or their youth centre is closed – that’s because the Conservative priority is tax breaks for big business,” he said at the party’s local election launch.

Unlike in 2014, Brexit is likely to be a background hum, at best, at these elections – certainly as far as the two main parties are concerned.

There is too much at stake for Theresa May and Jeremy Corbyn – as they try to hold the competing factions in their parties together – for it to be any other way.