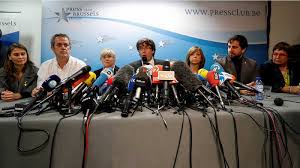 Catalan ex-leader Carles Puigdemont has said he wants to return to Belgium at the end of German legal proceedings.

Speaking at a press conference the day after his release on bail from a German prison, Mr Puigdemont also again called for fresh dialogue with Spain.

Mr Puigdemont was arrested in northern Germany last month en route from Denmark to Belgium, where he now lives.

German courts are still considering whether to extradite the former leader, wanted in Spain on sedition charges.

However, he is not allowed to leave Germany and must report to German police on a weekly basis.

Mr Puigdemont had been living in self-imposed exile in Belgium since Catalonia’s parliament unilaterally declared independence from Spain in October, following an unauthorised referendum banned by the constitutional court.

He was arrested on 25 March on a European Arrest Warrant issued by Spain.

“My wish is to return to Belgium. But only after the end of the proceedings here in Germany, not before,” he said at Saturday’s press conference.

Asked where he was staying in Berlin during the legal process, Mr Puigdemont joked “The police know”.

The former Catalan president also rejected suggestions that he had engineered the arrest in Germany, calling his detention “neither obstacle nor help”.

“There was not any plan about [the arrest]. The plan was to return to Belgium but the circumstances have changed,” he said.

“I will try to use the circumstances to continue my fight to defend my rights and the rights of the Catalan people.”

He repeated a call for dialogue with the Spanish state and asked the authorities to respect the results of last December’s regional elections – which saw the Catalan separatists win a slim majority.