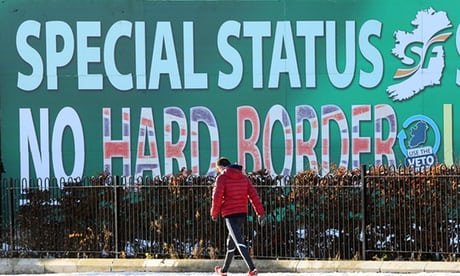 Ireland’s EU commissioner believes UK may never return to bloc – yet has no replacement plan for improving its citizens’ lives.

The EU has accepted that Britain will not be changing its mind on Brexit and may never return to the bloc after next year’s divorce, a leading European commissioner has said, as he warned that the country’s position in the world would be diminished rather than enhanced after its departure.

Phil Hogan, Ireland’s EU commissioner in Brussels, will say on Monday that EU leaders do not expect any substantive change in the UK’s position before article 50 of the Lisbon treaty is invoked in March 2019, even if there is a vote on the Brexit deal in parliament before that deadline.

In a speech at a Dublin City University Brexit Institute seminar in Brussels marking half-time in the article 50 negotiations, Hogan will say: “I for one, cannot imagine any circumstances in which the UK will change its mind on the desirability of EU membership – not for many years, if ever.”

Hogan, who has served as the commissioner for agriculture and rural affairs since 2014 and is close to the Brexit negotiating team, predicts that the uncertainty over what Britain wants in the deal will continue past the autumn, when the initial deal is due to be struck.

“Given the UK’s preference for the long game, we should not expect any rush to clarity on its part. One result is that we can expect the uncertainties that characterise the UK’s position to continue. This will make it useful for the EU to keep remind itself of the one thing that is completely certain – the UK is not going to change is mind on EU membership,” Hogan says.

He says the past year of negotiation has been a lesson to other communities in the EU who might push for their own version of Brexit.

Hogan says the union has accepted that the UK has “decided to leave the EU, and the UK will revert to third-country status in about 355 days from now … [and] its flag will be hauled down from before the EU’s institutions” on 29 March 2019.

The expression of certainty that the UK is leaving reflects the increasingly pragmatic nature of the European commission after months of being told by the prime minister, Theresa May, that Brexit means leaving the customs union and the single market, the cornerstones of the EU.

But it will be a setback to figures such as Tony Blair and Lord Adonis, who have recently intensified their campaign to reverse Brexit, and to campaigners within the Labour party, including the Brexit shadow secretary, Keir Starmer, who want a vote on the political exit deal in October.

“One thing we have already learned from Brexit is that the UK does not have a better idea. It does not have a replacement for the union as a way to improve the life quality of its citizens, its businesses and its standing in the world,” says Hogan. The “stubborn facts” overshadow the rosy future painted by Brexiters, he adds.

“Stepping into global Britain is stepping into a difficult world. And there will be a huge gap between hope and experience. One hopes that [Theresa] May’s confidence is not misplaced.”

He says there will be price to pay for a deal with the US, warning that a rapid transatlantic deal would probably depend on American access to Britain’s agriculture and food markets, a factor rejected by the EU in its Transatlantic Trade and Investment Partnership negotiations.

The commissioner believes that once outside the EU, Britain will have medium-sized nation status in trade negotiations. It will regain sovereignty but with “reduced bargaining power, reduced security of its markets and supply chains” and friction and cost added to trade with neighbours in Europe.

And the much vaunted deals with Commonwealth countries would never match the value of the existing trade with the EU, he says.

Official data puts UK exports to the EU at six times the level of trade with the 10 Commonwealth countries tracked by the UK’s Office for National Statistics.