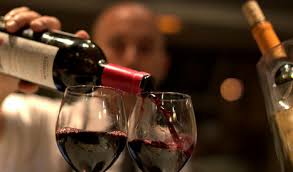 Spanish wineries led the world’s exportation of the red stuff in 2017 with sales of 22.8 million hectolitres, according to data released by the Spanish Observatory of Wine Markets.

However, for all the wine trickling out of the country, Spain only made €2,850 million in revenue, whereas France brought home over triple this figure (€9,000 million) and Italy billed over double (€6,000 million).

This is because Spain sells its produce very cheaply at 1.25 per litre, compared to France’s €6 per litre and Italy’s €2.78.

In fact, Spain sells its wine off the cheapest of almost any country, with only South African wines sold at a lower price (1.23 per litre), and lower even than wineries further afield, such as Australia (€3.1 per litre) or Chile (1.89 per litre).

The availability of cheap vino has not harmed the reputation of Spanish wine though, Rafael del Rey, general manager of the Spanish Observatory of Wine Markets, told Euronews.

“The average (quality) of Spanish wines packed in many of the final consumer markets is a reasonably good average,” he said.

Nonetheless, he admitted Spain has some way to go if it wants to equal its Mediterranean neighbours. “It is true that we are relatively far from French and Italian and this is fundamentally due to the greater experience the French and Italians have in the international markets compared to the Spanish market.”

The main challenge facing Spain is reducing the sale of cheap, mass-produced wine, which is flooding the market despite a lack of internal structures to deal with its distribution.

Bulk production of wine has, however, declined in recent years, although it still represents over half of Spain’s sales in 2017 — 12.6 million hectolitres were sold, compared to 10.2 million hectolitres of bottled wines, according to Spanish newspaper El Pais.

The overall picture for Spanish viticulturists and the rest of the industry is looking brighter. In 2017 Spanish exports grew by 2.5% in volume and 7.6% in turnover, due to a price increase of 5%.