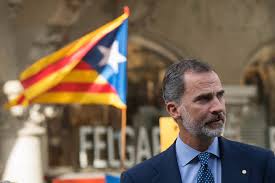 Spain’s King Felipe VI defended the work of judges during a visit to Catalonia Monday, in the presence of a magistrate ho charged 13 Catalan separatists over their independence bid.

The Spanish monarch’s firm stance against independence has angered some who say he should not take sides.

The bitter dispute over demands for independence plunged Spain into crisis last year and is now being thrashed out in the courts.

“I am aware, and we all are, of the difficulty and great responsibility which your role involves,” Felipe said during a ceremony for newly graduated judges in Barcelona, the capital of the wealthy northeastern region.

“You can always count on the confidence and support of the Crown.”

Among those in attendance was Supreme Court judge Pablo Llarena, widely criticised in Catalonia for having charged 13 separatists with rebellion over their failed bid to declare independence last year.

Llarena is due to decide later this week if he will let one of the 13, Jordi Sanchez, leave jail to be sworn in as Catalonia’s new regional president.

Hundreds of pro-independence activists demonstrated outside the building as the king delivered his speech.

They chanted “freedom for political prisoners” — their term for Catalan separatist leaders who have been remanded in custody while they await trial.

One demonstrator burned a picture of the king.

Fresh regional elections will be triggered in the region if a new leader is not elected by May 22nd.