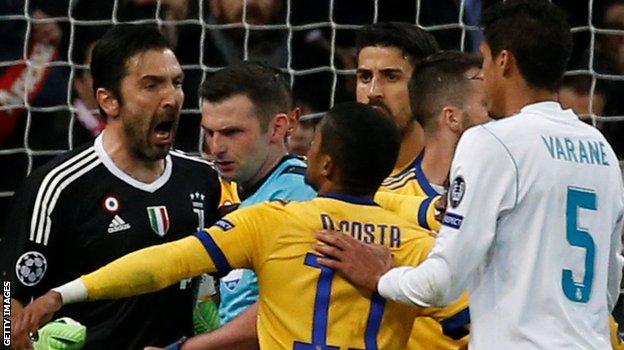 Ronaldo’s coolly taken 97th-minute penalty into the top corner came after Medhi Benatia brought down Lucas Vazquez in the box.

Juve goalkeeper Gianluigi Buffon, in what might be his last Champions League appearance, was sent off by English referee Michael Oliver after awarding the spot-kick, for foul and abusive language.

Real, Champions League winners in three of the past four seasons, came into the second leg leading 3-0, helped by Ronaldo’s stunning bicycle kick.

But the Serie A leaders got off to a perfect start when Mario Mandzukic headed in from Sami Khedira’s cross after just two minutes and Mandzukic got a second before half-time.

Blaise Matuidi pounced to capitalise on Keylor Navas’ fumble to level the tie on aggregate before the dramatic ending.

Real join Liverpool, Roma and Bayern Munich in the last-four draw, which takes place in Nyon on Friday at 12:00 BST.

The game looked to be heading for extra time before a chaotic final few minutes saw even the calmest of players lose control.

Ronaldo steps up to the mark

Real have endured a poor season so far in La Liga, sitting fourth in the table and 15 points adrift of runaway leaders Barca, who capitulated on Tuesday night to go out of the Champions League.

The competition is Real’s only hope of a major trophy this season, but they only just managed to sneak through to the last four for the eighth consecutive season.

Ronaldo, the Ballon d’Or holder, proved himself to be the best once again, stepping up under the most intense pressure to send his team through.

The penalty extended his incredible goalscoring form this campaign:

Not the send-off Buffon was hoping for

It drew parallels with Real boss Zinedine Zidane when his France playing career ended with a sending off at the 2006 World Cup final for a headbutt on Italy defender Marco Materazzi.

Italy’s most-capped international Buffon, who is much respected throughout the game, let his emotions overcome him at the end and was dismissed on his 650th appearance for Juve.

Buffon had announced in October that this would be his last Champions League campaign unless his side won the final, after which he had intended to play in the Club World Cup.

Buffon had been having a brilliant game, saving low from Welshman Gareth Bale and reacting sharply to keep out efforts from Isco and Ronaldo.

But he will not receive the dream send-off, missing out on claiming the only major trophy which has evaded him in his career.