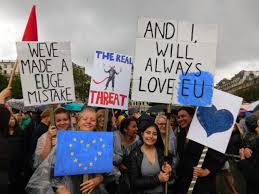 Thousands of anti-Brexit campaigners are planning to demonstrate at 350 events across Britain this weekend. Activists from Open Britain, the European Movement and Britain for Europe will take to the streets on Saturday from Aberdeen to Cornwall.

Organisers hope 500,000 leaflets will be handed out and street stalls set up in areas that voted both Remain and Leave. James McGrory, executive director of Open Britain, said: ‘Our largest ever national day of action is all about bringing together the various pro-European groups so that we can speak with one, unified, voice because we know that together we are stronger.’

On Sunday a new campaign calling for a referendum on the final Brexit deal will be launched.

Pro-Europe MPs including Labour’s Chuka Umunna and Conservative Anna Soubry will be speaking at the launch event in London.

James MacCleary, campaign director of European Movement UK, said: ‘The pro-European movement is gaining in strength and momentum and that progress will be reflected this weekend with a huge demonstration of grassroots power in favour of a people’s vote on the Brexit deal.’

Anne Weyman, vice chair of Britain for Europe, added: ‘We may come from different political parties, different traditions and different groups, but we are united by our desire for the people to have their say on the Brexit deal and we are determined to make sure their voice is heard loud and clear.’