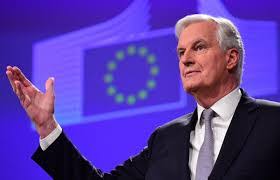 Michel Barnier is Brussels’ favourite to take over from European Commission President Jean-Claude Juncker in 2019, according to a survey in the European Union’s bubble.

Over 1,000 participants took part in the study, which is attempting to establish the future leaders of the European Union after the upcoming European elections next year.

Mr Barnier, the Commission’s chief Brexit negotiator, emerged as favourite to replace Mr Juncker as the EU’s top eurocrat, which would involve running Brussels while Britain is subserviently attached to the bloc during its Brexit transition phase.

More than 1,000 members of the “broader EU bubble” were surveyed for the survey to establish the bloc’s desired membership.

The think tank said: “Michel Barnier remains in pole-position to win the race for the top EU job in 2019 because of his increased public visibility as the chief negotiator on Brexit, as well as his strong political profit within the EPP.”

The position of Commission president is decided by the EU’s controversial Spitzenkandidaten process, in which the position is awarded to the group who wins the most seats in the European Parliament.

Mr Juncker has shown no signs of wanting to continue past his current term as president, leading to one of Mr Barnier’s acquaintances to back him for the role.

Veteran French MEP Alain Lamassoure said his countryman has always dreamed of holding the role and will be in a good position for to take the job if he delivers a successful Brexit for Brussels.

The VoteWatch Europe survey also pinpoints leading candidates for other positions, including the president of the European Parliament, European Council and European Central Bank.

Mr Weber has been a staunch critic of Brexit and will oversee debates, which won’t include British MEPs, if he actually wins the role.
Another German is tipped for the role of leader of the European Central Bank. Jens Weidmann, president of Deutsche Bundesbank, received 33.23 percent of the votes to replace Mario Draghi.

Christine Lagarde presents the German’s biggest opposition, according to the survey. The IMF boss, who has significant experience heading an international finance organisation, was handed 23 percent of votes to takeover in Frankfurt in November, 2019.

And if you are to trust the survey, Netherlands prime minister Mark Rutte will be propelled in to replace Donald Tusk as the European Council’s president.

Mr Rutte, who has 25 percent of the votes, is closely followed by Lithuanian president Dalia Grybauskaite, who has 20 percent.