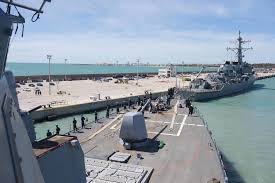 SPAIN has provided logistic support to the USA for its attack on Syria, joined by France and the UK, although has not taken part actively in the air strikes in retaliation over Bashar Al-Assad’s alleged chemical weapons massacre.

Defence minister María Dolores de Cospedal has been in close contact with her counterpart in France since Friday, and the US air base in Zaragoza (Aragón) has provided two planes equipped with supplies.

Also, the US air base in Rota (Cádiz province) has provided a Destroyer.

Spain’s involvement was inevitable in some way because of the presence of its North American bases – an agreement two years ago for the centre in Rota to be used by the US military as a refuelling stop and to employ its equipment and aircraft means the country was always likely to be caught in the middle if the US chose to attack Syria.

But Spain’s national government has said it supports the air strikes – president Mariano Rajoy says ‘crimes against humanity’ have been committed in Syria, referring to the barbaric chemical weapons attack on civilians.

Rajoy says he ‘evidently would have preferred concerted international action’, in an non-violent format, but that ‘attacks against defenceless civilians, against women and children, cannot go unanswered’.

“What has happened in Syria goes way above and beyond its constant breaches of the ceasefire, and the international response to these atrocities is legitimate and in proportion.

“Its aim is reduce [Al-Assad’s] régime’s capacity for perpetrating fresh attacks against the population in Syria.

“Only by maintaining a political transition process led by the United Nations can peace ever come to Syria, and only in this way can we put an end to so much suffering,” Rajoy concluded.

Spain does not have ‘boots on the ground’ in Syria, although since January 2015, a military presence – said to be around 100 soldiers – have been stationed at the Turkish base in Incirlik, near the larger city of Adana and close to the Syrian border.

Its purpose is to protect Turkey from possible ballistic missile attacks from Syria, and falls within the description of the NATO ‘Active Fence’ operation.

The Patriot Battery, as the mission is known, is based at the Ballistic Missile Defence Operations Centre (BMDOC) which comprises six rocket-launchers, a radar and an energy plant which runs 24 hours a day, according to Spain’s ministry of defence.

Spain’s mission in Turkey is ‘purely defensive’ and has no plans to attack.

The Patriot Battery is expected to be stationed in Turkey until at least this December.

Spain has not actively participated in any offensive since 2004 when protests on the street led to the newly-elected president José Luis Rodríguez Zapatero, of the left-wing socialists, withdrawing troops from Iraq.

But when the USA last attacked Syria – on April 7 a year ago – two Destroyers, the USS Porter and the USS Ross – from the base in Rota were used directly for the air strikes, causing outrage from Spanish society.

At the time, the government claimed it had been unaware of the Spanish Destroyers’ being used until after the attacks, saying prior warning was only sent to defence ministries in countries which had troops on the ground.

Similar opposition to the present strikes has been seen from members of the public in the UK and France, and many fear a Russian retaliation as US president Donald Trump has defied Vladimir Putin in going ahead with the air strikes.

Putin has warned the attack on Syria ‘will have consequences’, but as yet it is not clear what these are likely to be.