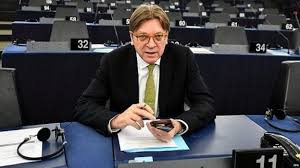 European nationals must not face a “bureaucratic nightmare” to stay in the UK after Brexit, a top MEP has said.

Guy Verhofstadt told the European Parliament the three million or so EU residents in the UK must be able to secure their future rights easily.

“After the Windrush scandal, we want to be sure that the same is not happening to our European citizens,” he said.

Ministers said the system would be “user-friendly” and forms would not be rejected on minor technicalities.

The UK and EU have reached agreement on residents’ rights after the UK leaves the EU, although this will only apply if an overarching withdrawal deal is agreed.

All EU nationals who arrive before Brexit day – 29 March, 2019 – and also during a transition period lasting up to the end of 2020, will have the right to remain, as will their family members.

However, they will have to apply for settled status or temporary permission to stay.

Ministers have said there will be a presumption in favour of this being granted in nearly all cases and unlike the previous process of applying for permanent residency, which involved filling out an 85 page document, there will only be a small amount of paperwork involved.

But questions have already been raised about the Home Office’s ability to process so many applications in a relatively short period of time.

And, during a debate in Strasbourg, MEPs drew attention to the ongoing Windrush deportations row in the UK – in which the children of Caribbean migrants who settled in the UK from the late 1940s to the 1970s but have no formal documentation, face uncertainty over their future as a result of recent changes in immigration rules.

The EU – and the European Parliament in particular – has always been sceptical about the ability of the Home Office to handle the registration of more than three million people in a timely and efficient way.

Revelations about the ordeal facing many Windrush migrants was bound to increase that sense of concern.

There has been concerted pressure from other European capitals to ensure that the registration process will be as simple as possible; now there may well be renewed attention on how legal guarantees given to EU citizens will be upheld after Brexit.

Spare a thought too, though, for the one million or so British citizens elsewhere in the EU who still have no idea what kind of registration system may be applied to them.

He and other MEPs are due to meet Home Office officials next week to talk through the details of the UK’s proposed registration system.

“We need to have citizens’ rights completed,” he said. “If there are changes needed, we will communicate that to the negotiators what modifications are needed to avoid real problems for our EU citizens.”

The BBC’s Europe reporter Adam Fleming said he understood the Windrush situation was raised during a meeting of the European Parliament’s Brexit Steering Group attended by chief negotiator Michael Barnier.

Ministers say the registration system for EU nationals will be up and running in the second half of the year and will remain open until 30 June 2021, giving people plenty of time to complete the forms.

Applicants will need to provide an “identity document” and recent photograph and, to minimise the need for supporting evidence, data such as employment records held by the HM Revenue and Customs will be used.

Officials say applicants will not have to account for every foreign trip they have taken while living in the country.

“Every EU citizen resident in the UK on the day the transition period ends in December 2020 will be eligible for some form of leave to remain, subject to criminality checks,” said a Home Office spokesman.

“We have committed to ensuring that applications will not be refused on minor technicalities and that caseworkers processing applications will exercise discretion in favour of the applicant where appropriate.”

Unlike other applicants, existing permanent residents will not to have to pay a fee to re-apply nor have to supply fresh evidence they are still living in the UK.