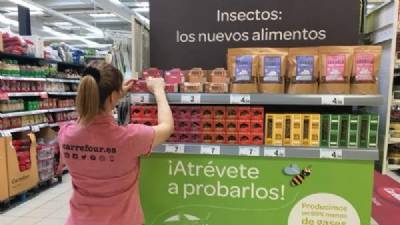 Branches of French-based supermarket Carrefour in Spain have begun selling snacks made with insects – including energy bars, crisps and cereal.

Now that European Union legislation has approved insects and fungi as ‘food’ fit for sale within the 28 member States of the bloc, Carrefour is the first supermarket in Spain to jump on the bandwagon.

According to the United Nations’ Food and Agriculture Organisation (FAO), over two billion people worldwide already eat insects as part of their normal diet and considers them ‘the food of the future’.

The FAO says they are rich in protein, vitamins B1, B2 and B3, a source of Omega 3 and Omega 6, all essential aminoacids, and other vital minerals such as iron.

Various types of insects are included in the ingredients in Carrefour’s new line of 10 products – pasta, cereal bars, and foodstuffs made with flour from ground bugs – and among those considered edible by the new EU legislation are grasshoppers, dragonfly, giant water bugs, silkworm and superworm larvae, and ants, particularly weaver or green ants.

Crickets are also on the list, and these have been eaten fried for decades in Cambodia, where they are a popular cinema snack – rather like popcorn in the west.

Carrefour says insect snacks are environmentally friendly, because breeding the species and turning them into food involves a process which reduces greenhouse gases by 99% compared with other manufacturing methods.

Also, the packaging is made from recycled materials.

All of Carrefour’s insect snacks are manufactured entirely in Europe and according to the strictest food-quality standards, in full compliance with EU regulations, a spokesperson for the chain assures.

Prices at Carrefour in Spain range from around €4.50 for cereals and €2 for snack bars, with the most expensive items being around €7.