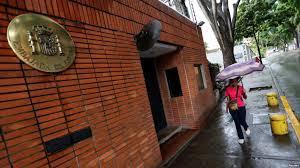 Diplomatic relations between Spain and Venezuela have seen tentative improvements after both countries agreed to reinstate their ambassadors.

In a joint communication, the two nations’ foreign affairs ministries announced the start of a ‘process of normalisation’ in order to ‘benefit citizens’ of Spain and Venezuela, who are ‘united by close ties which should be preserved’.

Back in January, the Venezuelan government declared the Spanish ambassador in Caracas a persona non gratain response to sanctions from the EU against seven Venezuelan diplomats.

Nicolás Maduro’s government cited ‘continuous aggressions and recurrent acts of defamation’ after Madrid welcomed a member of the Venezuelan opposition – ex-mayor of Caracas, Antonio Ledezma – who had escaped house arrest with his wife and daughter and fled to the Spanish capital.

Spanish ambassador in Caracas Jesús Silva Fernández was packed off home, and Spain responded in kind by firing the Venezuelan ambassador in Madrid, Mario Isea.

As a result of the transatlantic thaw, Jesús Silva will now return to Caracas and Mario Isea will come back to Madrid.

Maduro recently said he would be in agreement to the Spanish ambassador returning to Venezuela ‘as long as there was respect in political and diplomatic relations’ between the two governments.

A week ago, Spain’s Secretary of State for International Cooperation for Latin America and the Caribbean, Fernando García, and deputy minister for Europe from the Venezuelan government, Yván Gil, met in Madrid.

Both said afterwards that there had been ‘discrepancies’ and ‘profoundly opposing views’ between the two governments, but they admitted it would be ‘convenient’ to ‘normalise bilateral dialogue’ given the historic ties between the two nations.

After the meeting, Yván Gil sent letters to Venezuelan chancellor Jorge Arreaza and to Spain’s foreign affairs minister Alfonso Dastis in an attempt to build bridges.