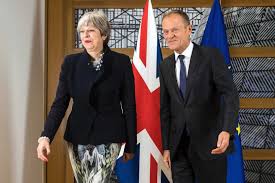 Britain’s hopes for a bespoke deal to let the City of London access the EU, and companies across the Channel to access finance in the UK, has taken a blow as a top European Commissioner warned that Brussels wants to keep an unusually tight hold over banking regulation.

Valdis Dombrovskis, the top official for financial services, told a City audience that he wants Britain to use the more generic ‘equivalence’ rules, which give Brussels more control – a system rejected by the UK Government.

Under equivalence rules, the EU could potentially give the UK just 30 days’ notice before pulling the plug on the agreement.

“Equivalence is not perfect, neither for firms nor for supervisors. But one should not make the perfect be the enemy of the good,” Mr Dombrovskis said at the City Week conference in London. “Equivalence has proven to be a pragmatic solution which works in many different circumstances, and it can be made to work for the UK as well.”

By contrast the UK wants a bespoke agreement of ‘mutual recognition’ in which the EU and Britain accept trade with each others’ firms as both sets of regulators are implementing the same global rules.

This should give finance firms on both sides of the Channel access to each others’ markets, even if the precise rules vary.

The aim is to replace the current system of ‘passporting’, under which a finance firm given a licence in any EU nation can access all of the others.

Other countries already use the equivalence system; Mr Dombrovskis said 15 ‘third countries’ have an equivalence deal on central counterparties for clearing derivatives, for example.

But the UK can expect a worse deal than those nations, as Brussels deems Britain to be the most important financial centre and so it wants to have more of a say over UK rules.

“Equivalence is only possible if there is close convergence of rules and supervision. If the EU and a third country should go different ways, the conditions for convergence will fall. This means the terms of equivalence may be changed or, as a last resort, withdrawn,” he said.

There is also a risk that the decision to grant equivalence is based on political discretion as much as the practical quality of each country’s regulation.

This could mean the EU cutting off British finance with 30 days’ notice at any time of Brussels’ choosing.

Last month Philip Hammond, the Chancellor, said the equivalence system is “wholly inadequate for the scale and complexity of UK-EU financial services trade.”

“It was never meant to carry such a load,” he said in a speech at HSBC.

“The EU regime is unilateral and access can be withdrawn with little to no notice. Clearly not a platform on which to base a multi-trillion pound trade relationship.”

The system would not give firms the certainty to continue doing business, she said, adding. “The current system excludes vital elements of the financial services sector, such as deposit taking, mortgage lending and payments.”

Jorg Gasser, a minister in the Swiss finance ministry, told the conference that the EU’s decisions on equivalence are “always political”.

“Equivalence procedures are never never only issues-driven,” he said.

“This is because the equivalence procedure is, at the end of the day, always political. We have been declared twice already equivalent for a certain area of market access in the past, but we did still not get the green light from the European Commission.

“A flagrant example is the equivalence of our stock exchange. We have been declared equivalent only until the end of 2018.”

The Swiss exchange has access to the EU, but it could be revoked at the end of this year. The Swiss fear that any decision to extend it will only be made in the final months of the year, causing difficulties for the exchange and its clients as they have no certainty over access.

“The problem is that technically we are equivalent – nobody contests that because it is the status quo. It is just a question of continuing this access,” Mr Gasser said.

“All technicalities have been solved for a very long time. But equivalence is most of all political, and that makes it difficult.”