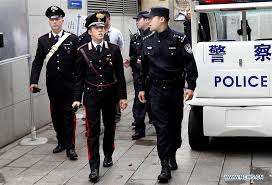 Police in northern Italy found a small arsenal of Kalashnikovs, pistols and ammunition hidden in the trunk of a rental car and arrested the Bosnian man who was driving it.

The ANSA news agency says police believe the car, which had Swiss license plates, was headed to Barcelona when they stopped it on a routine check April 19 in Gorizia, near Italy’s northeast border with Slovenia and Austria.

ANSA says police became suspicious when they found two Berettas in a bag. They then proceeded to search the rest of the car and found several guns in the spare wheel well of the trunk and another stash under the back seat.

The 52-year-old Bosnian was being held on suspicion of possession and transport of weapons of war.

This story has been corrected to show that the border is with Slovenia, not Croatia.

Copyright 2018 The Associated Press. All rights reserved. This material may not be published, broadcast, rewritten or redistributed.