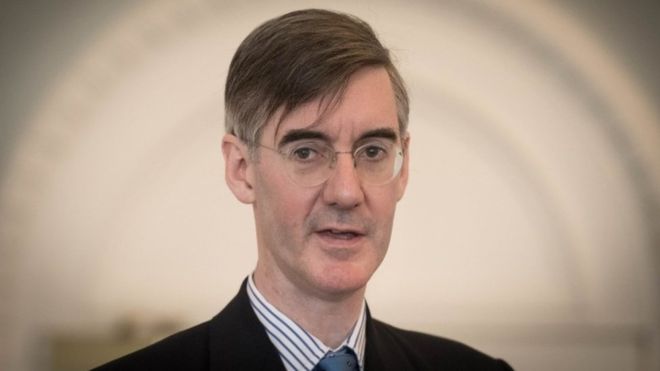 The leading Tory Brexiteer said it would be the same as staying in a customs union.

He also accused the prime minister of lacking “enthusiasm” for Brexit at a think-tank event in Parliament.

Mrs May has ruled out joining a customs union but has come up with two options to avoid a hard border in Ireland.

One of them is a “customs partnership” that would rely on new technology to track the final destination of goods flowing across the border, removing the need for physical customs checks.

This has previously been dismissed as “magical thinking” in Brussels but UK officials are reported by the Financial Times to believe the mood has changed and they plan to raise it again next month.

Mr Rees-Mogg said the “completely cretinous” idea would see the UK collect tariffs on the EU’s behalf for goods landing in Britain but intended for the bloc’s market, something Mr Rees-Mogg said would be “impractical, bureaucratic” and “a betrayal of common sense”.

The other option being proposed by the government would be to minimise checks rather than getting rid of them altogether, by using new technologies and things like trusted trader schemes.

“She is carrying out the will of the British people but it’s hard to read what level of enthusiasm she has for it,” he said.

The Conservative MP, who heads the influential European Research Group of Conservatives, also accused the House of Lords of “playing with fire” by attempting to “thwart” the result of the 2016 EU referendum.

He said it was now a case of the “peers against the people” after the government’s Brexit legislation suffered a series of defeats in the upper chamber.

He was speaking as a petition calling for a referendum on abolishing the House of Lords passed the 100,000 signature mark, which could trigger a debate in Parliament.

Mr Rees-Mogg said an immigration policy after Brexit that gave preferential treatment to EU nationals would be “racist” and “quite wrong” because, by and large, EU nationals are white.

Responding to Mr Rees-Mogg’s comments, Theresa May’s official spokesman said that it was part of the Upper House’s role to scrutinise legislation.

But he added: “We have been clear that we are disappointed with the decisions which have been taken by the House of Lords.

“We believe that the Withdrawal Bill was passed by the House of Commons and was passed in a way which would allow us to deliver the smooth Brexit which the country wants.”

The government had already set out its plans in relation to House of Lords reform, said the spokesman.

Asked whether he would agree that Mrs May had been “enigmatic” about her views of Brexit, the spokesman said: “The prime minister has made absolutely clear her determination to deliver on the will of the British people, and that she believes that we can deliver Brexit in such a way that provides for Britain a stronger, more prosperous and more secure future.”