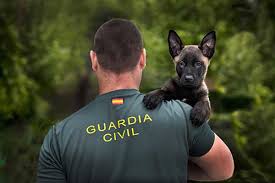 An animal charity in Spain has approached the United Nations to request an International Police Dogs’ Day in recognition of the invaluable work these brave four-legged ‘officers’ carry out and the constant risks and stress they face.

Héroes de 4 Patas (‘Heroes on four legs’), which takes in retired or injured service dogs who can no longer work and finds them new forever homes, says these faithful creatures risk their lives every day helping to rescue people from hazardous situations, tracing explosives and toxic chemicals, searching for missing persons and assisting in terrorism and other violent crime operations.

Not only do Spain’s police forces use them, but so do the fire brigade, the Armed Forces, the Civil Protection squad, various rescue teams and private companies, for security.

With their own International Day, ‘society can reflect on their vital work at least once a year’, says Héroes de 4 Patas.

The charity has recently organised a series of ‘animal fairs’, involving workshops and talks on pet care, adoption, police dog demonstrations and food and merchandise on sale for domestic animals, all in an attempt to raise awareness, affection and care standards of furry companions.

Spain owns an estimated 20 million pets or, on average, one for every two inhabitants and, contrary to popular misconception, is an animal-loving country where society largely believes non-human creatures deserve the same rights and respect as people – pet-owners in Spain consider their fluffy friends to be members of the family on the same plane as blood relatives, often to a greater extent than in other western European countries.

Vets in Spain tend to charge far less than those in the UK, since they are concerned that if they are too expensive, owners will not vaccinate their pets or treat them when they are ill.

The above photograph, taken by the Guardia Civil, shows 12-year-old Belgian Shepherd ‘superdog’ Elton, who found the body of 18-year-old Diana Quer after she had been missing for 16 months in Galicia, and who helped trace eight-year-old Gabriel Cruz from Almería who had been murdered and hidden by his father’s girlfriend.