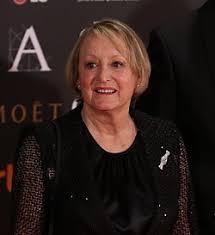 BRITISH-BORN Spanish Film Academy chairwoman Yvonne Blake will not return to her role following her stroke in January, and the job is likely to go to her current second-in-command.

Celebrated costume designer Ms Blake, 77, is expected to be out of action for some time as she recovers, meaning her deputy, Mariano Barroso, has announced she will be replaced next month.

She has been named Honorary Chairwoman, but the executive role will be subject to election on June 9.

The closing date for candidates’ applications was on Friday (May 4), and only Barroso has put his name forward.

His place already looks secure, as he has the backing of two members of the board who will be promoted to first and second deputy chairs.

Catalunya-born actress Nora Navas, who won a Goya Award for Pa Negre (‘Black Bread‘) and nominations for Tots Volem el Millor per a Ella (‘Everyone Wants the Best for Her’) and Felices 140 (‘Happy 140s’) will be second deputy chair.

Navas and Portela have both supported the candidature presented by Barroso, the well-known national film director and scriptwriter behind the productions Todas las Mujeres (‘All the Women’) and Kasbah.

When announcing Yvonne’s substitution, Barroso paid tribute to her valuable work with the Academy and in the industry.

Spanish directors she has designed costumes for include Gonzalo Suárez, Vicente Aranda and Jaime Chávarri.

Her Best Costume Oscar was for the British historical drama Nicholas and Alexandra, filmed in what was then Yugoslavia and centred on the last Tsar of Russia, Nicholas II and his wife, Tsarina Alexandra, during the first two decades of the 20th century.

As well as The Bridge of San Luis Rey, Carmen and Canción de Cuna (‘Cradle Song’), Yvonne won a Goya for Rowing with the Wind in 1988 – the film about poet Percy Bysshe Shelley and his Frankenstein author daughter Mary which led to its co-stars Hugh Grant and Liz Hurley meeting and becoming partners.

She has won BAFTAs for The Four Musketeers, Jesus Christ Superstar, Nicholas and Alexandra and The Three Musketeers, and an Oscar nomination for the first of these.